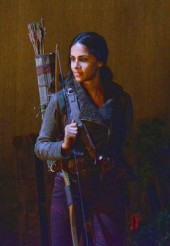 Everything that is wrong with REVOLUTION can be summed up in the episode “Kashmir.”

Not only did NBC give viewers of the show another empty promise in delivering the confrontation between Monroe (David Lyons) and Miles (Billy Burke), it gave us an entire episode that literally did nothing but move the gang from Point A to Point B with yet more mean, nasty Militia in-between and Charlie-isms.

But it was worse than just this. Logic seemed to fly right out the window in this episode more than any.

Here’s the basic setup. Charlie (Tracy Spirdakos), Miles, Nora (Daniella Alonso) and Aaron (Zak Orth) continue to make their way to Philadelphia and try to recruit help from the local resistance, who are obviously suspicious of a former Militia general in Miles in their camp and asking for men to fight Monroe.

One dude convinces another dude and they give them a handful of troops to go after Monroe but the only way into Philly without going straight at the compound is through the subway tunnels. That works for a while until Charlie (of course) steps on a mine. So Nora has to save her but the tunnel collapses leaving them trapped.

Here’s where logic is left behind. So about half way into this episode everyone starts hallucinating. Why? Because there is no air coming into the tunnel after it caved in. What’s stupid is this happens almost immediately after the collapse and the area they are in is HUGE, they go through room after room, each getting bigger by the minute. So the air magically disappeared in all these rooms too?

Worse still, they actually gave us some character development of two people from the resistance that was actually interesting. Ashley, the chick archer that was fighting for her father but knew nothing of the former world and Starkey, the former gambler resistance guy that found a new calling once the lights went out. But what do they do? Of course, the gambler guy is a mole for the Militia and he ends up killing the archer chick. Then Charlie kills the gambler guy.

It makes me angry. Why even give us any character development on people who you are just killing off in the same episode? They should just be nameless red shirts. Otherwise we get hope that they may be more than pouting Charlie or hero Miles or whiny Aaron.

Here’s another logic buster. Starkey (a mole for the Militia) was the second in command of the Philadelphia resistance decides that it is a better idea to deliver Miles to Monroe than stay and continue to spy and give recon on the enemy of the Militia? That makes perfect sense especially since Miles was going to Philadelphia with or without the dude’s help.

Oh and who didn’t see Rachel (Elizabeth Mitchell) was building a bomb not an amplifier? Note to the creators: Come on, let’s not make everything so obvious. Surprises are nice in genre shows.

I want to like this show. I really do. But they are making it very hard to do so.