Home » dexter do you see what I see review 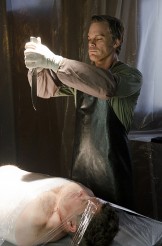 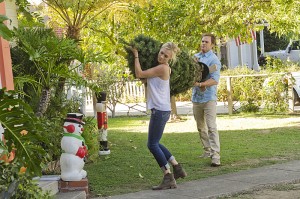 Reviewing and recapping this season of DEXTER, a person runs the risk of being redundant: There’s so much going on! They went there! The actors are brilliant! What can possibly happen next? Yada-yada-yada. Well, “Do You See What I See?” elicits more of the same response. We have Dexter (Michael C. Hall) increasingly in love with Hannah (Yvonne Strahovski) at the same time he wonders if he can trust his feelings for her, we have the issue of the intensifying enmity between Hannah and Dexter’s police lieutenant sister Deb (Jennifer Carpenter) and we have Captain LaGuerta (Lauren Velez), of all people, pulling s a smart and fast one.

Dexter is so comfortable with Hannah that he starts to envision a future with her – literally, as we see a teenaged version of Harrison borrowing the car while an older Dexter and Hannah gaze adoringly at each other. Hannah seems to want this future, too. Deb, however, is still determined to nail Hannah for murders past and recent – including Sal Price, a true-crime writer Deb had started dating.

When Deb goes to interview an old roommate of Hannah’s, Hannah shows up at Deb’s house. Hannah tells Deb she wants the two of them to find common ground for Dexter’s sake and Deb says her own idea of what’s best for Dexter is to protect him from Hannah. This means Deb is going to do her best to find evidence proving Hannah is a killer.

With LaGuerta strongly suspecting that Dexter was and is the Bay Harbor Butcher, Deb plants evidence that “proves” the killer was the late Sgt. Doakes. Dexter had framed Doakes for the crimes, though Doakes was killed by someone else.

Meanwhile, Hector Estrada, one of the men who murdered Dexter’s mother in front of him when Dex was a child of three, is being paroled. Dexter tricks Hector into meeting him alone at night in a shipping container lot. However, when Dexter gets Hector on his table, Hector starts yelling about how this is a set-up with “that woman” – the police captain who was so eager for Hector to get out of jail. Dexter realizes that LaGuerta has set up a trap for him. He yanks the still-alive and well Hector out of the shipping container with him. Hector escapes Dexter and jumps off the dock. Dexter hides as LaGuerta and an officer find the shipping container with its insides swathed in plastic sheeting and a running chainsaw, but nothing else. 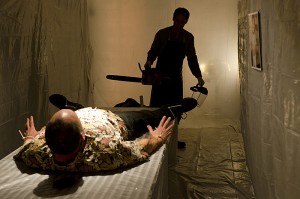 Then Deb is in the hospital, having blacked out behind the wheel while driving her car. Her system is full of anti-anxiety meds. When Dexter races to Deb’s side in the hospital, Deb is certain Hannah tried to poison her. Hannah denies it, saying that she’d never harm Deb because of Dexter’s feelings for his sister and because Dexter is smart enough to find clues if Hannah did something. Dexter finds Debra’s water bottle in her badly smashed car and gets the water tested – it’s full of medication. Dexter gives Deb evidence that he’d previously hidden that proves Hannah killed Sal Price. Dexter goes to Hannah, tells her he’s sorry – and then Deb shows up with police to arrest Hannah. Hannah tells Dexter she wishes he’d killed her.

In case our sympathies had gotten all fuddled up, “Do You See What I See?” straightens us out. Whether or not we’re rooting for Dexter to have a normal life with someone who understands him – which Hannah provides in a very attractive form – underneath it all, we’re rooting for him to be loyal to Deb. It’s a relief when Dexter decides that it’s not worth having Hannah if it means she’ll continually be a threat to Deb (to say nothing of lying at length to his face). Again, Hall continues to find new ways to show us Dexter’s emotions, with love and longing and doubt and resignation all coloring his responses here. Strahovski is remarkable, giving Hannah a low-key, calm sincerity that keeps us guessing right along with Dexter.

Kudos to the writers and to actress Velez for bringing LaGuerta back to her old formidable sneaky self. The character had been relatively sidelined for a long time, but having her engineer Hector Estrada’s release in order to entrap Dexter is a stroke of genius. Velez once more lets us see the anger simmering under LaGuerta’s ready for primetime exterior and we suddenly remember what an epic foe she can be.

What’s going to happen with Hannah and Dexter? Will LaGuerta find proof against Dexter? Will Dexter move against LaGuerta? Will the Kasha Brotherhood return? What will Estrada do? What will Deb do? How the hell are they going to resolve everything in this season’s one remaining episode? How can we last until next season? How can we stand it that next season is the last season? So many questions. Such a great show.