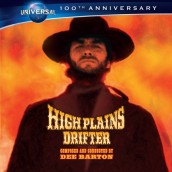 Intrada’s new partnership with Universal to celebrate the studio’s 100th anniversary has yielded many blasts from the company’s musical past, but none so singularly vengeful-minded, or more crazy fun than Dee Barton’s score for Clint Eastwood’s Stranger, the undead sheriff who paints a godforsaken town hell red in 1973’s HIGH PLAINS DRIFTER.

Playing, and directing a character who was easily the most sadistic Man With No Name in his cannon, Eastwood deconstructed the genre that made his bones with a picture that was just as much horror as it was western, a genre mix for which his frequent musical collaborator from PLAY MISTY FOR ME and THUNDERBOLT AND LIGHTFOOT whipped the life out of the persona that Ennio Morricone helped shape, conjuring a Spaghetti western score as written by the devil’s messenger himself.

Getting payback with this DRIFTER is much like being shoved through a saloon’s haunted house on the way to the big gundown. On one end Barton’s got howling voices, chimes, demonic harpsichords and an unbalanced orchestra, while on the other there’s the more sonically acceptable spaghetti plate of harmonica, galloping military percussion and wah-wah guitar, carried along by a full-charge heroic theme. It’s a balance between musical terror and eccentric traditionalism that brilliantly reflects DRIFTER‘s twisted black humor. But as PLAINS goes down the path to payback, Barton is sure to make the soundtrack even more unhinged, with guitars ripping out a gnarled, acid rock vibe, along with the kind of screeching, nail-on-blackboard synths that would latter accompany a host of cinematic slashers. HIGH PLAINS DRIFTER is likely the closest Clint ever came to being one, and hearing Barton’s work now has the exhilaration of Freddy Krueger blasting forth from Morricone’s skin, six-shooters blazing with the most audaciously entertaining, and twisted “western” score the icon ever received, delightfully more trick than treat for fans just expecting another Ennio knock-off on these shores.

Eastwood ended up wiping out much of the orchestral elements of Barton’s score with a creative (if personally non-malicious) vengeance. But now these symphonic ghosts from the past are back to kick ass with stellar sound dug up from the Universal vaults, making HIGH PLAINS DRIFTER  a true score premiere in more ways then one, complete with a bunch of harmonica, percussion and guitar elements to boot. But the oddest duck has got to be an attempted title tune by a Vocalist With No Name. His attempt to sing-talk lyrics like “Praise be this land, beautiful land, long live its place in the sun” under Barton’s theme, complete with a Deputy Dawg twang, stands as the most slyly absurdist touch amidst the extras on Intrada’s long-time-in-coming special edition.