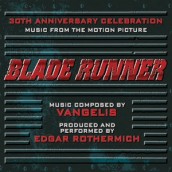 It's more Vangelis than Vangelis

If there was one score that made a generation rip their hair out in frustration, then it was Vangelis’ BLADE RUNNER. In 1982, there’s no doubt that hundreds of people went directly from theaters to the record stores in search of the Greek composer’s seminal synth future noir score, only to find a vinyl album performed by some group called The New American Orchestra instead of the promised Polydor original soundtrack. Needless to say, Vangelis’s lush and technically sophisticated work this was not.

So one can understand fans’ reluctance when presented with a “30th Anniversary Celebration” produced by Buysoundtrax, a label whose re-performance heavy catalogue has had some hits that capture the retro magic of past classic titles like John Carpenter’s ASSAULT ON PRECINCT 13 and Ennio Morricone’s THE THING, releases particularly helped by having John Carpenter’s “associate” Alan Howarth perform them. But Buysoundtrax has also had cheesily performed misses, the most mediocre being a scuttled rendition of Vangelis’ THE BOUNTY. So given that track record, it’s with no small sense of relief that I can report that Buysoundtrax’s BLADE RUNNER is more human than human – a terrific, spot-on recreation of Vangelis’ masterpiece, if not better than the subsequently reworked “Blade Runner” releases that The Man himself has since put out.

If Edgar Rothermich is indeed a replicant of Vangelis, then his DNA is only one generation away from the source here. Having collaborated with Tangerine Dream member Christopher Franke, Rothermich certainly has the 80′s synth chops to astoundingly recreate BLADE RUNNER‘s score from ear alone. Seemingly performed on the original computer banks that BLADE RUNNER magically sprang from in Vangelis’ “electronic laboratory,” Rothermich’s gear is perfectly attuned to the beautiful sonic wash that conveyed the melancholy, rain-drenched streets of 2019 Los Angeles, from the electric sax simulation of “Blade Runner Blues” to the instrument’s actual, smoky brass accompaniment, performed with subtle nuance by Paul Frederick for the “Love Theme.”

But while these famed pieces have been heard in just about every BLADE RUNNER compilation or pseudo-soundtrack that came out, a point of contention is just how much music remained to be released, something made worse when Vangelis spent an entire third disc on his 25th anniversary album noodling about with “inspired by” music. Thankfully, that problem has been solved in style here. Finally, we get all of Deckard’s climactic mano-a-replicant battle with Pris and Batty, twelve minutes of ghostly synth suspense, tolling bells and the sound of life furiously dripping away. Rothermich’s attention to detail is so fastidious that we even get the piano-tapping cue “Deckard’s Dream,” complete with the sound of passing flying cars at its start, and the voices of the Unicorn that marked him as artificial life. About the only element that doesn’t pan out is the warbling Arabic voice under “On the Trail of Nexus Six,” but it’s a small digression given the album’s success.

This BLADE RUNNER also delivers the source cues that filter through near-future LA, from Gail Laughton’s gentle Oriental-style percussion that propels the “Bicycle Riders” to a black-humored jazz arrangement of “One More Kiss Dear” – heard as Deckard is complemented for giving Zora the kiss of death. Indeed, so faithful is this BLADE RUNNER that it even gives fans a rendition of John William’s opening Ladd Company logo music. As a major leap forward for Buysoundtrax, BLADE RUNNER might still not be the real Vangelis deal. But you’d need a Voight-Kampff musical test to prove it.