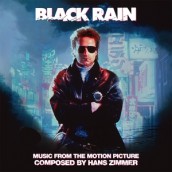 While his earliest hit among the masses was with The Buggles’ “Video Killed the Radio Star,” Hans Zimmer’s Krautrock-inspired synth-pop rhythms would soon be putting a similarly prophetic stake through the heart of traditional Hollywood scoring. It was Zimmer’s talent for music tech that marked his journeyman progression to deservedly becoming film scoring’s King of the World, creating a singularly unique fusion of electronics, exotic beats and rock adrenalin through such works as BURNING SECRET, PAPERHOUSE and A WORLD APART. The studios’ ears would really be pricked up with Zimmer’s whimsical Afro-centric score to 1988′s Best Picture RAIN MAN, music just brilliantly crazy enough to get an Oscar nomination. But it would be next year’s BLACK RAIN that would truly be the game changer for this German emigrant, a high impact electro-orchestral miasma of Japanese music and hard-hitting “gunshot” percussion that not only reinvigorated the sound of gunplay, but provided the template of the “Zimmer” sound that brought a new, atmospherically rhythmic approach to action scoring the world over.

BLACK RAIN marked both Ridley Scott and Hans Zimmer’s explosive entry into the supercop genre. Re-invigorating everything that was cliché about previous ugly American fish-out-of-water crime fighting expeditions like McQ. Scott’s all-important visual sensibility turned Japan into a land at once foreboding and intoxicating, a neon flood of the senses that Zimmer also captured with surreal adrenalin. As opposed to the old school orchestral approach of writing solid musical ins and outs, Zimmer’s powerful combination of synths and symphony became an atmospheric wash of suspenseful textures that carried memorable themes in their wake, along with metallic hits perfect for a Yakuza punk’s face getting slammed into a metal fence in industrial Osaka. In a Hollywood that certainly wasn’t foreign to musical Oriental-isms, Zimmer’s approach was completely fresh in its rock and roll use of Japanese instruments, yet one also filled with a poetic sense of reverence and mystery for a Gaijin lost in an culture where both the law, and the underworld had centuries-old codes of honor. But above all, BLACK RAIN was about rhythm, with a jackhammer sense of beat-driven excitement that would turn many of its action cues into movie trailer montages for years to come, let alone a sensibility that inflected Zimmer’s evolution to orchestral action. But as far as Zimmer’s old school synth scores go, BLACK RAIN remains the inventive exemplar in terns of both Zimmer’s burgeoning excitement and musical production value

The incredible layering and stereo separation of Zimmer’s Asian soundscape comes through loud and hard on La La Land’s complete release of BLACK RAIN which is just as toe-tappingly impactful as when Michael Douglas ran his motorcycle roughshod over the rising sun. Not only does the double-CD include alternative tracks, but also the original, and now remastered Virgin LP presentation from many a moon ago, including its still-memorable songs that range from Iggy Pop living up to his namesake with “Living on the Edge of the Night,” UB40’s reggae groove for “The Way You Do the Things You Do,” Ryuichi Sakamoto chanting Koto club number “Laserman” and both film and album versions of Greg Allman singing Zimmer and Will Jenning’s “I’ll Be Holding On,” an inspirational anthem for mullet-wearing bad-ass cops if there ever was one.