The star talks about his new CW superhero show 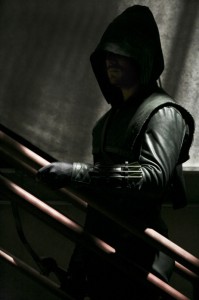 ARROW is the new CW top rated series and stars Stephen Amell in the starring role of Oliver Queen/Arrow. If you watched SMALLVILLE you probably were a fan of Justin Hartley’s role as the Green Arrow/Oliver Queen and at first you may find it a bit strange to see Amell in the same role, but that won’t last long.

In the D.C. comic book Green Arrow had bright blonde hair with a blond goatee, and wore a small mask to hide his identity. In the television show Arrow wears only a green hood, large enough to hide his face in shadow so that people will not figure out his identity, and green face paint around his eyes. This is similar to his comic book mask, and Amell’s look is more dirty blond and instead of a goatee, has only stubble.

Recently Assignment X got a chance to catch up with Amell for a few minutes and talk about the new show.

ASSIGNMENT X: What is it like starting up with a new show?

STEPHEN AMELL: It’s all roses right now. It’s all exciting. It’s all new and fresh. Nothing really negative has happened yet and I’m sure there will be hurdles along the way, but so far so good.

AX: Describe the show in your own words?

AMELL: ARROW is about Oliver Queen who was shipwrecked on an island for five years. He went in one person and came out 180 degrees different. He has a clear list of objectives and targets in Starling City and he is going to go after them.

AX: If you were away that long and came back, what would you do?

AMELL: [Laughs] I don’t know if I could survive away that long and come back and do anything. The good thing about the show and I was hoping that they would do this is that Oliver on the island we are going to see him taken down to basically nothing. If we are going to take the show and ground it into reality we can’t just expect that all of a sudden he magically becomes good at archery. He’s got to learn. He’s got to learn everything and that’s the fun part of the show. 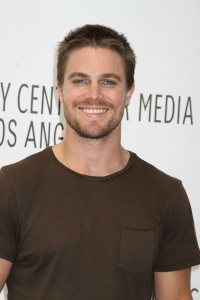 AX: Were you a comic book fan growing up?

AMELL: I was a wrestling fan growing up – professional wrestling, which is sort of a genre into itself. I read SUPERMAN and SPAWN. I always did sort of tend to lean towards DC Comics, which is important. The idea of playing a super-hero on TV was all that I needed.

AX: When I saw the pilot I was so used to seeing Smallville with Justin Hartley playing Arrow/Oliver Queen, so it was very different.

AMELL: You know I understand the comparison, because obviously we are playing the same character on the same network, but I think after the pilot those comparisons stop. I’ve watched comic book fans reaction to the whole thing and they are a tough nut to crack. They were very pessimistic when the show was announced. They became cold when the first picture was released. They got luke-warm when we did the trailer and when the first episode started screening people started liking it and now I feel like they are ready to become fans.

AX: Did you have to learn how to shoot arrows or did you know beforehand?

AMELL: Yeah, I’ve gotten really good, which is important. I practice all the time. I have a really good archery coach, Patricia and she is great.