Oliver enters a doomed romance with the daughter of a mobster who’s bent on revenge against her murderous father. 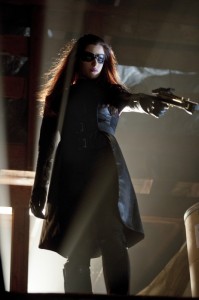 This week’s episode of ARROW focuses on the love life of Oliver Queen (Stephen Amell).  Now that Laurel Lance, (Katie Cassidy), the ex-girlfriend Oliver is not-so-secretly still in love with, is dating his best friend Tommy Merlyn, (Colin Donnell), the path is clear for him to start dating Helena Bertenelli, (Jessica De Gouw) the damaged daughter of a mob boss who’s also a gun-wielding vigilante who plots bloody revenge against her father and his organization for murdering her fiancé.  Because clearly that plan will work out fine.

Well, maybe it doesn’t work out for him, but it works out pretty well for the audience.  Oliver and Helena (aka “The Huntress”) make a better team than Oliver and Laurel in the sense that they get to dress up as costumed superheroes together, he with a bow and arrow and she with a crossbow he’s given her as a gift, and then administer beatings and puncture wounds to some of her father’s drug-dealing goons.

They both have serious daddy issues, a shared interest in martial arts, and not much use for due process of law, so superficially their relationship makes a lot of sense.  But obviously this romance is not to be.  In a really nice scene where Oliver & Helena and Tommy & Laurel go on their mutual first dates to the same restaurant and all wind up sharing a table together, things go south in a hurry.

After much camaraderie and reminiscence between the three childhood friends, Helena begins to understand that, in fact, Laurel is the love of Oliver’s life, and her being with his best friend is unlikely to alter that situation in a positive way.  Soon after this disappointment she’s on a killing spree, murdering members of the Triad organization in hopes they’ll blame her father’s crime family and start a war that will leave her father dead.  Oliver must intervene to keep her and the rest of Starling City safe, but in the process it becomes clear that she’s consumed by a darkness that even Oliver can’t save her from.

The best parts of “Vendetta” are when Diggle (David Ramsey), now serving reluctantly as Oliver’s partner in crime, and the conscience of the show, both tries to warn Oliver away from Helena and then has to get Oliver’s head right when things with Helena inevitably don’t work out.  He has a nice line about why a desire to “help” and “save” someone shouldn’t form the basis of a relationship. Also, there’s a really fun training sequence that gives Oliver a chance to show off his near-super human prowess with the bow to Helena, casually shooting a tennis ball out of her hand like he was brushing lint off her jacket, in hopes of showing her how much control and patience one needs to A) be a great archer, and B) not take crazy, dangerous risks as a costumed vigilante.  Obviously she doesn’t learn this lesson.

“Vendetta” also follows up on Oliver’s stepfather, Walter Steele (Colin Salmon) and his quest to learn more about the secrets his wife, Moira Queen, (Susanna Thompson), has been keeping.  Having engaged his company’s quirky, brilliant computer expert Felicity Smoak, (Emily Bett Rickards), to help him find out about the money Moira is transferring off the company’s books and into a secret account, Walter then finds a secret journal, (not unlike the one that contains Oliver’s “list” of bad people who were in business with his late father), hidden in Moira’s bedroom.  It’s emblazoned with a symbol that also appeared electronically in connection with Moira’s secret wire transfers.

ARROW has become a very competent, fun show that stays close to it’s comic book origins, but doesn’t hold them so close that it alienates anyone who isn’t particularly interested in superhero stories.  I was prepared to nit-pick about Helena’s “Huntress” costume, which I thought looked silly, since it has a mask that isn’t big enough to actually conceal her identity, and skirt-like coattails that seemed really impractical to run and fight in, but it’s a minor part of the show and isn’t odd enough to distract from the fine work ARROW’s writers did in building her character.  Oliver’s hood seems just as impractical, (how does it stay on his head when he’s fighting?  Scalp Velcro?), but his whole aesthetic is based on Robin Hood, so he gets to have a hood, and I’m not going to question it.

And while ARROW is good at doling out predictable (yet satisfying) amounts of action and romance each week, it’s not a show that seems to be concealing a big secret at it’s core, and I’m not bracing myself for a big twist or turn during next week’s midseason finale.  The two central mysteries of ARROW seem to be “What happened to Oliver on the Island?” and “What’s the conspiracy that Oliver’s Mother is involved in and is she actually one of the bad guys?”  The answers seem almost certain to be “Bad things were done to him by somebody” and “Some cabal of wealthy criminals, and no.”   More than that we don’t need to know, because our enjoyment of ARROW is not predicated on speculating about the answers to these questions.  We won’t be let down if ARROW doesn’t blow our minds with a startling revelation here, because we really don’t need our minds blown to justify our investment in this show.  ARROW does what it does very well, and with gusto, and in a world full of over-imagined high-concept shows that demand you endure weeks of plot twists and red herrings in the hopes of getting some nebulous, usually underwhelming payoff at the end, that’s not a bad quality to have.