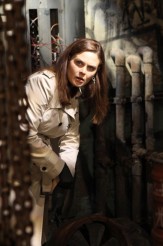 A spirituality-tinged episode told from an unusual point of view 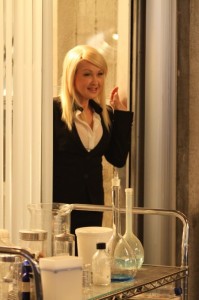 Although the show certainly has a formula, BONES commendably always tries to add something new to the mix. In “The Ghost in the Machine,” we see the episode from a novel point of view – that of the deceased, 14-year-old Colin (Cameron DeFaria). After Colin’s skeleton is found in a greenhouse, the Jeffersonian team swings into action. We watch them from the point of view of the skull throughout most of the episode.

Everyone is more disturbed than usual by the victim’s extreme youth, with Brennan (Emily Deschanel) even bursting into tears at one point. Angela (Michaela Conlin) is happy to have her psychic friend Avalon (Cyndi Lauper) come by the lab, since Avalon feels that Colin has unfinished business on Earth. This profoundly annoys everyone else, with Brennan overtly stating that she thinks the concept of spirits, ghosts or any other form of life after death is nonsense. However, sooner or later, everybody including Brennan winds up talking to Colin’s skull.

After the usual lab teamwork, it is finally deduced that Colin borrowed his dad’s car to impress some older kids, then fell off the hood while the car was in motion. The older kids panicked and hid the body, but finally come clean when confronted. Avalon senses that Colin still has unfinished business, which turns out to be playing a song he’d recorded to the older girl he loved.

“Ghost” comes down on Avalon’s side, since – like her – we actually see Colin in the lab at the end, waving goodbye to the nice people who’ve solved the circumstances of his death and made sure he was heard. The mood here is about equal parts whimsy and gentle melancholy, with a little actual silliness at the end, when Booth makes Brennan a mix tape and they both start dancing. Indeed, there’s been a lot of fancy footwork on BONES lately, but there are worse philosophies on episodic television than, “When in doubt, dance.”

Lauper, reprising her role, is an enjoyable guest star. She and Avalon have both turned it down a little, so that the character seems a little more at home among nonbelievers. After her insights last time, it also seems like the other characters might give her more benefit of the doubt, but that’s a separate issue.

It makes sense that the characters, all of whom save Sweets are parents or parent figures, immediately imagine how they’d feel if they lost their children and react accordingly. The mood doesn’t get maudlin, but it’s a little more serious than usual. This makes the one-sided interactions with Colin (he can’t respond) have a sense of gentle fantasy, rather than the show’s customary dark humor when dealing with human remains.

BONES would lose its edges of all episodes were like “Ghost in the Machine,” but as a one-off, it’s a good-hearted, sweet installment.