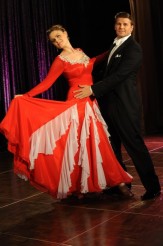 A balance between depression and giddiness, with the more somber material getting the better story set-up 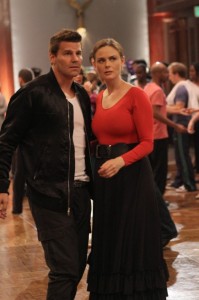 BONES starts the second half of its eighth season with “Diamond in the Rough,” which takes its title from one of those interesting biochemical facts the show often presents to us. In this case, exposure to certain types of natural elements can cause a skeleton to become studded with diamond-like deposits – which are really hard to remove, much to the dismay of lab intern Wendell Bray (Michael Grant Terry). Cue Hodgins (TJ Thyne) and his enthusiasm for experimentation.

The victim is a ballroom dancer, so Booth (David Boreanaz) – who we learn was a dance instructor in college – and Brennan go undercover at a ballroom dancing competition. There is a giant suspension of disbelief here, and not just because neither character would seem to have an affinity for the terpsichorean arts. By the time the competition gets going, Booth and Brennan have presented themselves as representatives of the law to at least one of the suspects, who has no reason to not tell others. Clearly, having our heroes go undercover is an excuse to let the characters dress up formally and dance, but this is a clumsy way to handle it.

Meanwhile, Angela (Michaela Conlin) is in a real funk over the fact that her career has become about facial reconstruction of murder victims, rather than any kind of uplifting art. Hodgins beseeches lab bossCam(Tamara Taylor), who cuts back on Angela’s hours so that she can have more time to work on what she loves.

Deschanel seems to be having particular fun with Brennan’s enjoyment of both dancing and competition – when Brennan engages in anything, she plays to win – and there’s no denying that she and Boreanaz both look swell in the formal wear. Brennan’s joy and klutziness are both part of the humor here, which would be fine if it made more sense that they were in the competition in the first place. (The episode tries to work around this by having Booth ready to pull out at a moment’s notice, but it’s still a pretty flimsy premise.)

Angela’s depression is sensitively handled and gives Conlin some strong material, including a speech where her character gets to expound on painting with the same intensity that Hodgins often talks about insects. It’s a good character touch and it’s a reminder that, for all we are entertained by what happens at the Jeffersonian, the puzzles of human remains are part of a larger darkness.