bones review the but in the joke

An existential musing on the nature of comedy, with Brennan and Booth often relegated to the background 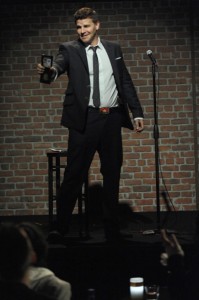 BONES is often deliberately comedic, but in “The But in the Joke,” the script by Keith Fogelsong gets ambitious and examines the nature of comedy. It starts with an agitprop street artist – think Banksy – who goes by Zed (Jay Paulson) attempting to paste a poster over a billboard, tripping over his art supplies and falling off the scaffold in what’s actually a classic slapstick gag. Zed lands on a pile of human remains that stick to him, thanks to the fact that he’s covered in his own super-glue. Upshot: Zed has to go with the remains to the Jeffersonian until our team can figure out how to safely separate him from the decomposing body.

When it turns out the victim was a rising stand-up comic, we learn that lab assistant Colin Fisher (Joel David Moore) practices his own brand of stand-up humor in clubs and even has a following. Fisher’s idea of humor isn’t for everyone – he sees the hilarity in skull fractures, for example. Booth (David Boreanaz) winds up going undercover and doing stand-up, using a mixture of jokes known to have been stolen by the deceased and jokes written by Fisher and Sweets (John Francis Daley). Booth scores better with his own ad-libs than the supplied gags. The culprit turns out to be the young brother of the victim’s girlfriend – the crime was motivated by rage when the comedian announced he’d be going to New York and ditching his old life.

Meanwhile, it turns out that Angela (Michaela Conlin) is a big fan of Zed, somewhat to Hodgins’ (TJ Thyne) consternation.

An observant reader will notice that there’s no mention of Brennan (Emily Deschanel) in the above synopsis. This is because our heroine doesn’t figure heavily in the plot. There’s a fun epilogue scene where she finds Sweets’ humor brilliant as Booth attempts to demonstrate why the jokes aren’t funny at all, but the episode is mainly focused on the supporting and guest characters. Once in awhile, it’s good to change things up and give the rest of the cast a chance to shine, but this makes three episodes in a row now. It might be a good idea to let Brennan and Booth take center stage again.

This said, Conlin does a wonderful job of showing Angela’s rue, longing and acceptance all at once as she realizes she may be hitting her version of a midlife crisis and Boreanaz hits all the right notes as Booth is surprised by how much he enjoys getting laughs.

The sticky remains are suitably gross even by BONES standards. As for the exploration of why something is a knee-slapper to one person and a non sequitur to someone else, “The But in the Joke” is hardly definitive, but it at least discusses the subject in an intriguing way that simultaneously moves the plot along.

Article Source: Assignment X
Article:TV Review: BONES – Season 8 – “The But in the Joke”