Home » the walking dead when the dead comic knocking review 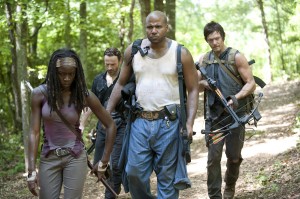 In the seventh episode of THE WALKING DEAD Season 3, “When the Dead Come Knocking,” Michonne (Danai Gurira) meets Rick (Andrew Lincoln) and the gang, bringing them much-needed formula as well as dire news about the whereabouts of Glenn (Steven Yeun) and Maggie (Lauren Cohan). An expedition to Woodbury begins, but there Milton (Dallas Roberts) is trying to learn the secrets of the undead, Merle (Michael Rooker) is brutalizing Glenn, and the Governor is continuing to romance Andrea (Laurie Holden) while showing the darkest side of his true nature.

As we get ready for the mid-season finale, this is an episode that breaks down best as a study of character. In Glenn’s case, the ever-resourceful young man that has often been essential to the group’s survival but sometimes left behind when the bigger emotional beats take place most definitely rises to the forefront and showcases his tenacity and strength when faced with taking down a zombie while tied to a chair. Meanwhile, we see Maggie go through a horrendous experience (more on that later), resulting in her providing just what the Governor needs to launch a war … or will he be beaten to the punch?

Speaking of which, I had a feeling a lot of the vile behavior and torture perpetrated upon our heroes by the Governor in the comics would one day be given to Merle on the TV show, so it’s no surprise when we open this episode to find him interrogating Glenn while Maggie helplessly listens from an adjacent room. But having been one of those people willing to give some of this incarnation of the Governor the benefit of the doubt in past episodes, I can now safely say … forget it. The man has fully shown his dark side via one of the series’ most uncomfortable and disturbing scenes to date. It’s a sequence with no walking dead, no fantasy elements at all – just a man wielding power against another human being and doing so with no moral or ethical restraints whatsoever.

It begins as the Governor always does, with false civility and feigned concern, but it turns fast. It’s a sad and painful thing to see, and it even slyly references the comic, but it most assuredly gives us the true Governor behind that suave politician’s mask (even if it doesn’t go nearly as far as the comic book, at least not yet). In Morrissey’s Governor, we have a great counterpoint to Rick’s strong but far more compassionate approach to leadership.

In other corners of the story, Andrea – along with the audience – learns that the mysterious experiments that Milton has been conducting are far from the “mad scientist” tampering we might have expected and a long way from the insanity of the arena that entertains the Woodbury residents. There’s no DAY OF THE DEAD Dr. Logan lunacy here, but the results may be just as useless, since Milton’s attempts to discover if the undead retain memory are futile; after all, we (and Andrea) know better.

Michonne’s arrival at the prison is a nice mirror of her similar arrival at Woodbury – weapon confiscated, ways to escape more or less blocked – but the difference is in the other people and the measure of the man leading the way.

There’s a nice scene where Carl (Chandler Riggs) names his sister, but there does seem to be something just a bit too neat about how quickly both he and his father are getting past Lori’s (Sarah Wayne Callies) death. Yes it’s TV, yes the pace is moving along quickly, and yes we’re heading toward a mid-season break and have plot issues to deal with, but this show has been at its best with character and in this case it feels like the full ramifications of such a major loss are perhaps getting lost in the shuffle. Still, Carol’s (Melissa Suzanne McBride) reunion with the group is nicely handled

With a straight-forward homage to the classic “zombies banging at the door” visual, and the sudden, swift arrival and departure of a hapless hermit, this episode propels us neatly into next week’s mid-season finale, as Rick and company arrive at the walls of Woodbury.

UPDATE: TV Review: THE WALKING DEAD – Season 2 – “Made to Suffer”