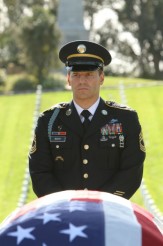 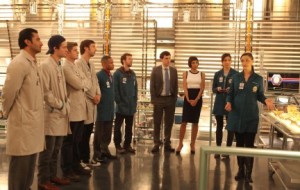 The BONES episode “The Patriot in Purgatory”is clearly designed to honor Veteran’s Day. It breaks almost every rule in the book – it focuses on guest characters, it’s didactic, it shoehorns in a whole bunch of related issues – and yet it’s surprisingly good. Part of why it works is undoubtedly the fun of seeing so many recurring squints together at last and part of it is because the mystery of what happened to the body under investigation is such an intriguing puzzle, though. Mostly, though, “The Patriot in Purgatory” works because it feels like everyone involved genuinely cares about the issues they’re addressing, so there’s real heart behind the rhetoric.

Brennan (Emily Deschanel) is on a basketball kick, going so far as to read the autobiography of coach Phil Jackson and taking it as life gospel. Booth (David Boreanaz) is a little taken aback – this isn’t quite what he envisioned when he persuaded Brennan to watch a little court action with him. Brennan, however, feels she should be team-building, so she calls in her five best assistants – Dr. Clark Edison (Eugene Byrd), Finn Abernathy (Luke Kleintank), Colin Fisher (Joel David Moore), Wendell Bray (Michael Grant Terry) and Aristoo Viziri (Pej Vahdat) – to work on identifying and finding cause of death on a backlog of unknown corpses.

For a little while, the assistants, who have not worked together before, are nervously competitive, but Brennan blithely orders them to cooperate. Things take a somber turn when Aristoo begins work on the body of a homeless man and discovers he died ten days after September 11, 2001, in the vicinity of the Pentagon. Booth winds up having to use his Pentagon connection (Dylan Neal), but eventually it is learned that the deceased was a Desert Storm veteran whose PTSD was so intense that he left his wife and then-young son to protest daily in front of the government in the hopes of getting posthumous recognition for his battle comrades.

On 9/11, the veteran rushed into the crumbling Pentagon and saved three people (one played by an effective Charlayne Woodard) from being crushed in the rubble, only to die himself ten days later of injuries sustained during the rescues he performed. The man is buried with military honors in front of his widow, son, the people he saved – and our Jeffersonian lab team.

Later, Brennan is in tears, realizing that the self-control she so cherishes is a form of denial about random brutality, like 9/11, and that any of the people who died that day could have been Booth.

Because Brennan experiences emotions out of sync with most people’s experience, this last bit just about makes sense, providing a necessary emotional climax in what might otherwise be a reach. (People who were already adults at the time still experience extreme grief about the events of 9/11, but most epiphanies have already occurred.)

Having Brennan studiously and joyously adopt basketball coaching as a form of laboratory leadership is all the more funny because it is strangely apt. It is a bit of a stretch, even in the BONES-verse, for the assistants to all initially be quite so overtly threatened by one another – they’re temps, not teens – but once they come together, it’s very entertaining to see these good actors play off each other.

One can imagine there was a bit of discussion over exactly what the somewhat insular Finn could say that would be highly provoking without being deliberately rude to Aristoo about Muslims. Aristoo’s comeback is both emotional and instructive – yes, there’s a bit of “this is good for you” in the dialogue, but Vahdat sells it beautifully and it’s also something that still needs to be heard by as wide an audience as possible.

There’s a lot loaded into “The Patriot in Purgatory,” between 9/11, anti-Muslim profiling, observations about how traumatized war veterans are too often failed by the system and how the homeless are treated as less than human, in life and in death. That’s a lot of criticism to spread around, but “Patriot,” scripted by BONES co-show runner Stephen Nathan, does it more deftly than one might expect. There’s more message and ambition here than an hour of entertainment television can easily sustain, but it works as well as it does due to the admirable conviction and skill of all concerned.