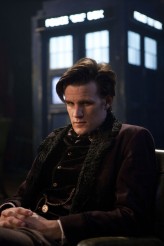 First Look: New photo of Matt Smith from the DOCTOR WHO Christmas special 2012 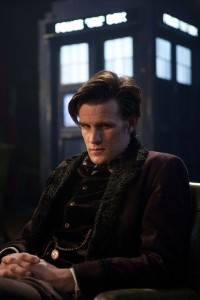 The BBC has released a new publicity photograph of Matt Smith as the Doctor sporting a considerably darker (and perhaps even more ‘Doctorish?’) outfit. The picture provides a sneak peek of this year’s DOCTOR WHO Christmas special. A prequel to the special will air as part of this Friday’s CHILDREN IN NEED live charity event on BBC One sometime around the 8:30-9:00pm slot. A trailer for the special itself, which will see the Doctor meeting his new companion played by Jenna-Louise Coleman, will accompany the prequel.

Ah, but wait, you say: Didn’t Coleman already appear in this year’s Series 7 debut episode, “Asylum of the Daleks?” Indeed she did, and the nature of her return to the show, her companion character, and any possible connection to her role as Oswin in “Asylum” is a mystery for now.
The 2012 DOCTOR WHO Christmas special, written by show runner Steven Moffat and also featuring the return of fan-favorite characters, Silurian adventuress Madame Vastra (Neve McIntosh) and sidekick Jenny (Catrin Stewart), as well as actor Richard E. Grant (once the Doctor himself…twice) in a pivotal role, airs at 9:00pm on December 25 on BBC America.

Tags: A Town Called Mercy, Asylum of the Daleks, Dinosaurs on a Spaceship, Doctor Who, Doctor Who Christmas Special 2012, Matt Smith, Season 7, The Angels Take Manhattan, The Power of Three, episode, posters