Series 7 of DOCTOR WHO concludes for a while with a fifth – and for the Williamses, final – episode 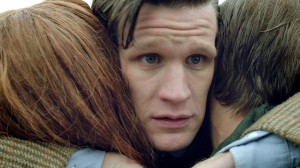 In the fifth episode of DOCTOR WHO Series 7, “The Angels Take Manhattan,” the Doctor (Matt Smith), Amy (Karen Gillan), and Rory (Arthur Darvill) are in New York when a massive incursion of Weeping Angels introduce a host of problems, including the possible death – again – of Rory. When River Song (Alex Kingston), Amy and Rory’s daughter and psychopath, turns up to help out, you know things won’t end well. Or will they? Perhaps true love will triumph after all, either here and now or somewhere back in the past…

I suppose it was almost inevitable that given my opinion of the storyline that has been an intrinsic part of Amy’s involvement in the series, this would be the one potential misfire in the very short run of new episodes this year. At long last the Williamses are gone (supposedly), and I for one am glad to close the book on that story. But let’s not forget something important – for a group of people watching the show now, Amelia Pond and her long-suffering (and often-dying) husband Rory Williams will always be “their” companions, and the departure of these characters is a sad time after which nothing will ever be the same again. So for all those fans, here’s hoping this departure provided at least a partially satisfying finale to their tale.

And yes, there are plot holes galore in the latest scheme of the Weeping Angels, not least the inexplicable way the Statue of Liberty can just stroll around with no one noticing its presence in the city or absence from its pedestal, and there are also massive inconsistencies in the way in which DOCTOR WHO has dealt with time, fixed points, and so on. In this era, rewriting the entire universe has been on the table at least once, but now we’re back to not tampering with things again, only because it’s time to write out some cast members. Still, there are a few nice moments, a bit of a return to the Angels seeming creepy and effective, genuinely moving performances by the entire main cast that almost manage to transcend the uneven material, and a stunning use of New York locations.

Now – one last time – let’s talk about the baby that’s not in the room. Here was one last chance, especially given how much time keeps getting rewritten during this era, to resolve one of the most aggravating and (arguably) offensive elements of the last several years’ storytelling. Knowing there’s a young toddler Melody/River in old New York from episodes past, why not reunite the family, unwrite the River we know, and instead leave a happy couple with a baby that will now be raised by her true parents and not by aliens hell bent on programming her into a lethal killer? Even when Amy tells the Doctor at the end to go back and tell little Amelia about all the things she has to look forward to (hey, doesn’t that rewrite history? Oh, never mind…), she doesn’t even mention having a child that grows up to be the very same crazy adventurer that just shared their final journey with the Doctor. Slips her mind easily, that whole having a daughter thing. Alas, it seems Melody is forever lost and years of child abuse by Kovarian and her minions will remain part of the Moffat-era canon. Family entertainment indeed.

Although it’s nice to know Amy and Rory live a happy life together, even that revelation feels misjudged at the end by leaving it off camera. We only have Amy’s voice over to tell us rather than provide one single shot of the two of them reunited in the past and at long last freed from the Doctor’s meddling (which is definitely how it felt in the last several stories – remember when traveling with the Doctor was supposed to be exciting and make you into a better person?). Even in trying to provide some sort of conclusion to one of the series’ most convoluted stories, this episode manages to miss the little touches that would have made it better. For my part, I’d just like to move on now.

Well, that’s all the new DOCTOR WHO we get until Christmas, and with the 50th anniversary looming ahead as well, all I can think is: remember when we used to get 13 episodes of new WHO in a row? Whatever they wind up doing in 2013, let’s just hope it is special…and not “Planet of the Dead” or “The Waters of Mars” special either. Ho ho ho!