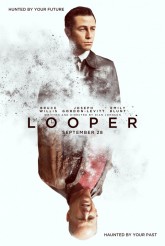 To say exactly which venerable time travel question LOOPER poses would be to give the game away. You’ll certainly know it when the film gets to it, but what’s especially cool is that writer/director Rian Johnson manages to come up with a new answer to the old moral conundrum.

How we get there is a tale in itself. Joe (Joseph Gordon-Levitt), our protagonist and narrator, is an assassin who works for the Mob in 2044. Time travel hasn’t been invented yet, but it will be in 2074 – and then it will be promptly declared illegal. To paraphrase an old saying, when time travel is outlawed, only outlaws will use time travel. In this case, the Mob in the future – when it’s just about impossible to dispose of bodies – will send their victims bound and gagged back to the past, where they are promptly disposed of by people like Joe. The catch is that the Mob hates loose ends, so that some of the people sent back are their current employees – again, people like Joe. Killing one’s sent-back future self is known as “closing your loop.” The killer is then expected to retire with a small fortune and have a good life for thirty years, knowing how it will end.

To avoid total confusion, let it be said now that LOOPER postulates multiple timelines. In one, Joe immediately shoots his future self (Bruce Willis) and lives out his thirty years, falls in love – and figures out how to save himself from his past self when he’s caught and sent back to close the loop. This results in another timeline where future Joe escapes from present Joe. The catch is that future Joe, while trying to evade present Joe, can’t kill or even severely injure present Joe without doing harm to himself. Present Joe is desperate to kill future Joe before his bosses wipe them both out. But it turns out that future Joe has an agenda that encompasses more than mere survival. It’s pretty tough for both Joes, as their erstwhile employer (Jeff Daniels) is sending out pretty much his entire workforce of hit men to kill them.

Yet another plotline gets woven in, bringing with it elements of classic Steven King-style horror. Unless somebody spoils it for you, the tale and the characters are refreshingly unpredictable. The dialogue, while it doesn’t offer any instant-classic quotes, also avoids clichés. The action is visceral and the violence has impact and weight, rather than being something we (and the characters) shrug off.

Gordon-Levitt’s features have been altered with prosthetic makeup to render him a better visual match to Willis as his older self. It’s faintly jarring in terms of sensing there isn’t something quite right about the actor’s appearance, but the makeup itself is smooth and unobtrusive. Gordon-Levitt gives younger Joe a watchful quality that can manifest as thoughtful or thuggish, rendering him convincingly unpredictable.

For his part, Willis and the filmmakers use his iconic presence effectively, while at the same time giving older Joe a sense of inner torment, so that we realize that pain may cause him to lash out in ways we don’t anticipate.

Emily Blunt is extremely good as a tough-minded woman Joe encounters, and Pierce Gagnon impresses as her very bright little boy. Daniels comes across as extremely wise and soulless as the crime boss and Noah Segan is excellent as an underling who has a Wile E. Coyote-like determination. Garret Dillahunt is extremely good as a low-key associate of Joe’s, although the instant he shows up, some viewers will get automatic TERMINATOR: THE SARAH CONNOR CHRONICLES flashbacks, as the role is not entirely dissimilar. Piper Perabo does well as a canny prostitute.

As with a lot of time-travel stories, LOOPER has some loopy internal logic issues when it comes to the central paradox. It also has another key question that has nothing to do with time travel, namely why the killers are required to assassinate their own future selves. It seems like the mobsters could avoid a lot of grief and mutiny by simply not informing the employees that they’ll be whacked in thirty years and just have other present hitters kill their co-workers’ future selves. One can imagine that this could have been an expositional nightmare, but younger Joe has to explain so much in voiceover as it is that a little more wouldn’t have hurt, and would stop us from wondering, “But why …” and not coming up with a satisfactory answer regarding this plot fulcrum.

These matters aside, LOOPER is solid in performance, action and effect, with some admirable surprises along the way and at the end.