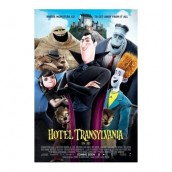 A fun, non-scary animated kids film about a hotel for monsters

With CLOUDY WITH A CHANCE OF MEATBALLS, last year’s ARTHUR CHRISTMAS and now HOTEL TRANSYLVANIA, Sony Pictures Animation is eking out a wonderful identity for their children’s animated films.

Fun, quirky, and very funny, each film proves to be a little ball of creative comedic energy that defies expectations and also provides a screwball world view in making an animated film.

The beauty of HOTEL TRANSYLVANIA is its simplicity and its amazing voice cast which brings added comedic heft. It’s also wonderfully drawn and conceived with director Genndy Tartakovsky bringing an anarchic since of style and wonder to the film.

The story follows Dracula (Adam Sandler) trying to be a single dad caring for his young daughter Mavis (Selena Gomez). After his wife was killed by “humans”, he built a hotel to protect her and keep all monsters safe.

It’s Mavis’ 118th birthday (think of it as her 18th in kid years) and daddy is preparing a big birthday bash. She wants to travel though and see the world, but old Drac still views the world as a very dangerous place for monsters. Conflict arises.

Then a human shows up – Jonathan (Andy Samburg). It’s an accident he found the place, but Dracula tries to hide his human origins by dressing him up as Frankenstein’s cousin. The problem – Mavis and Jonathan have fallen for each other.

The gags and one-liners with all the monsters is what makes HOTEL TRANSYLVANIA such a treat. It’s not too scary and not too over-the-top. It has a sweetness to it that’s infectious and this is probably one of Sandler’s most convincing and least over-the-top performances in some time.

The other thing that Sony’s animation division has succeeded with is its ability to create films that work both for kids and adults. And if you don’t have kids, the films work as comedies all on their own as well (as this and CLOUDY both prove).

While Tartakovsky is known for his animated work on TV (THE POWERPUFF GIRLS, THE GRIM ADVENTURES OF BILLY & MANDY, SAMURAI JACK), he’s brought a similar crazy sensibility to HOTEL as well. The film has a timeless feel and it’s very fast-paced. The jokes fly fast and furious – especially the visual ones, which will only be enhanced with further discoveries on repeated viewings

HOTEL TRANSYLVANIA is a great animated film and a perfect Halloween treat for the entire family and for a change, it’s a vampire comedy that doesn’t, well, bite.