A sad farewell to the Ponds, but Moffat delivers a really well-written episode! 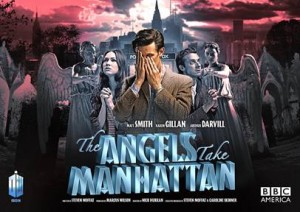 “The Angels Take Manhattan” is a tough episode of DOCTOR WHO –  in fact it might be the toughest since Matt Smith took over as the Eleventh Doctor. This episode is the big farewell to Amy (Karen Gillan) and Rory (Arthur Darvill), and since Amy has been the Doctor’s companion since his first episode in this newer incarnation, this has been a good run for the two of them.

There’s also been a lot of change and evolution for the Ponds over the last couple of seasons. Amy has gone from a child to a girl in love with the idea of the Doctor, to a married woman, to a mother, and finally to a woman in her mid-thirties trying to make the normal and the action packed parts of her life work with each other. Rory has pretty much been the same loveable, bumbling guy who has been killed off a few times, been a plastic Roman centurion and waited outside of a giant box Amy was lock in for two thousand years, a dad, and again a mid-thirties guy trying to find balance between normal life and life with the Doctor. I do like the fact that in the end Amy chooses Rory over a life with the Doctor. It is important to me that she does that and it makes her more real, instead of just being a tag along sidekick.

I admit I was skeptical that this episode could make me cry. I was quite certain that nothing can top Rose (Billie Piper) being sealed off in a parallel world at the end of Series 2, Donna Noble (Catherine Tate) getting wiped out of existence at the end of Series 4, and the 10th Doctor (David Tennant) regenerating alone in the TARDIS after saying farewell to many of his companions. I was wrong. The exit of the Ponds was both bittersweet and wrenching. No one likes to see the Doctor unable to save people, especially when it’s people he cares the most about, so his pain at the end of this episode was really raw.

Now reading further you will encounter spoilers sweetie, so be warned.

I like the fact that River Song (Alex Kingston) came back for the farewell to her parents. She didn’t seem at all phased by what befell the Ponds, and I would assume she can use her vortex manipulator to visit them, even if the Doctor can’t. I love the fact that she is now allowed to age, that she is a professor, and that she has been acquitted of killing the Doctor (there is no record of him ever existing now). Plus the somewhat uncomfortable “cougar” aspects of their relationship are discussed in this episode and I summed up by River’s line, “When one is in love with an ageless god who insists on the face of a twelve-year-old, one does one’s best to hide the damage.”

The Angels themselves were pretty awesome as always. I love that whenever Steven Moffat revisits his creations, they always get new aspects. I like the introduction of baby Angels, and the fact that the Statue of Liberty is an Angel is pretty much one of the creepiest things ever, and also one of the BEST visuals of this new Series.

Timey Wimey Wibbly Wobbly is at the heart of this tale, as is so often with Moffat, and he’s not afraid to make you really have to think about the hows and whys of the plot. So because of the Angels, the Ponds are stuck in fixed points in time; those being when they got zapped to the past, and when they died in the past. But, why can’t the Doctor go see them in the 1940’s, or 50’s, or 60’s? Someone is going to have to explain that to me. I get that he can’t go back to 1938 New York, but what’s to stop him from seeing them further down the timeline? Plus lets take into consideration the events that may or may not be changed in “Asylum of the Daleks.”

The Doctor obviously doesn’t have a Dalek for a companion so that episode is completely changed and re-writes everything. Doesn’t it? So does this mean Amy and Rory never reconciled and she is still a model and they got divorced, since the Daleks wouldn’t have kidnapped all of them to go to the asylum if the musical signal was never there to be broadcast? Is this how the Doctor saves the Ponds as well? Maybe I’m making too much of this, only Steven Moffat knows and he’s not saying until Christmas.

So that’s it for WHO for now. Waiting with the rest of the Whovians for the Christmas Special! Until then, it’s re-watching episodes, listening to Big Finish and maybe replaying the new game on PS3.