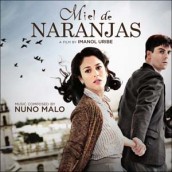 Portuguese composer Nuno Malo powerfully takes on the post Spanish Civil War, with its battle between freedom and fascist oppression continuing to take place in the region of Andalusia. It’s there in the 50s that a green recruit to Franco’s army thinks he’s set to do easy time, before finding himself in a crisis of conscience that’s both political and romantic- twin emotional poles that Malo evocatively conveys. His beautifully performed score is full of delicate foreboding, with lush strings and piano textures bringing to ear such dark Thomas Newman period scores as ROAD TO PERDITION and CINDERELLA MAN.

It’s music that tells us that there’s nothing sweet about the translated title of ORANGE HONEY, as hypnotic orchestral music conveys an era that’s thankfully lone gone for Spain, while incorporating shivering electronic textures to make the approach musically relevant. Like characters who know that demanding freedom will bring death, Malo’s haunting work mostly keeps to the shadows, its bigger symphonic passages getting across an impressive sense of the story’s tragic scope, as well as the expanse of Malo’s talents in music’s socio-political arena.

Click on Link: To Purchase The ORANGE HONEY soundtrack