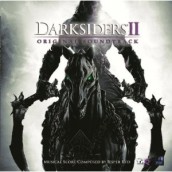 Having made a musical killing for such button-mashing slay-a-thons as ASSASSIN’S CREED, BORDERLANDS and HITMAN, Jesper Kyd gets one of his most intriguingly violent soundscapes for his first entry into DARKSIDERS, a game which now marks its second venture into post-apocalyptic territory. It’s a world wiped of humanity, where a horseman named Death battles a horde of angels and demons to bring back mortals to reap.

It’s a clever conceit that straddles sci-fi, fantasy and horror, and Kyd pretty much hits every note, all while remaining remarkably light on his feet. Not nearly as cruel in its approach as the action would seem to dictate, Kyd’s DARKSIDERS II is a strikingly beautiful miasma of female vocals, vaguely medieval percussion, emotional orchestrations and ethereal doom. Rarely has the End of video game Days had such a poetic atmosphere, one that could often function just as well inside a Tron game as a home entertainment center. Never failing to take an interestingly melodic character path, as opposed to engaging in wantonly barbaric action, Kyd manages to deliver the metal-banging goods while going for surreal atmosphere.

Spread across two discs, DARKSIDERS II conjures a captivating mood that’s all things to all players, and certainly the most interesting and unique stab this composer has taken in his penchant for death-dealing, the clash of blade against demon skin almost existential in its impact.

Click on Link: To Purchase The THE DARKSIDERS II soundtrack