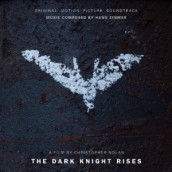 The swelling, patriotic heroism that John Williams gave to SUPERMAN could just as well be a burst of crucifix-shaped sunlight in contrast to the thrumming, uber-dark approach that Hans Zimmer and James Newton Howard gave to what’s arguably the most downbeat, if not utterly grim comic book saga in movie history. And now that Howard has left the bat cave with his more emotionally conventional orchestral touch, Zimmer’s wall of beat-sound is now truly ruling the belfry, taking the musical saga to new depths of intoxicating grimness for  THE DARK KNIGHT RISES.

Fans of old school superhero scoring might be missing the more clear-cut symphonic approach that could be taken for the material, let alone the eccentric Wagnerian edge that Danny Elfman gave to Tim Burton’s far more entertaining takes on the material. But that’s never been the direction that Christopher Nolan wanted The Bat to go in for his theses in despair. And the result has always been akin to a percussively solemn tone poem to reflect the bleak prospect of fighting the good fight in a Gotham that fears you. But that being said, Zimmer’s approach has always had a toe-tapping catchiness to it, music that becomes a bit sleeker here for the relentless, time bomb ticking plans of Bane. Varying between subtle melodic mournfulness as Bruce Wayne is thrown into the depths of despair to the more rhythmic bombast of a city going to explosive pieces, Zimmer more than ever shows that he knows how to build ominous excitement to a fever pitch like no mega-composer’s business, coming up with a truly great conflagration of suspense for the highlight cue “Imagine the Fire.”

With his main themes making their reappearance from BATMAN BEGINS and THE DARK KNIGHT (along with those distinctive bat flap effects) RISES  is very much of a seamless piece for a musical saga that’s utterly distinctive for not following the distinctive rulebook of how to nobly embody a superhero. And while there’s nothing quite as memorable as the chalkboard-scratching dissonance of the Joker theme from THE DARK KNIGHT, Zimmer uses the chants of Bane and his terrorist groupies to far more sonically pleasing effect, a stadium-full of voices warped to become perhaps the most effective percussive instrument in Zimmer’s battery of them. Probably the “easiest” and most intoxicatingly pessimistic listen of the bat albums, Zimmer conveys the essence of heroism as the worst job in the world, let alone Gotham City- but one that’s a thrillingly bold necessity nonetheless.

Click on Link: To Purchase THE DARK KNIGHT RISES soundtrack