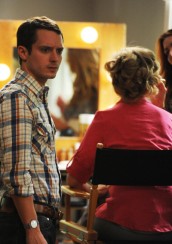 We didn’t see this coming, and yet it all oddly fits, per usual with WILFRED

WILFRED ends its second season on a note of genuine mystery with “Secrets,” which hints that Wilfred may have been around for longer than we, or even he, ever imagined.

As Jenna (Fiona Gubelmann) and Drew (Chris Klein) prepare to walk down the aisle that’s been made for them in Ryan’s (Elijah Wood) backyard, Wilfred (Jason Gann) confronts Ryan with a child’s drawing. In the drawing are figures that represent Ryan, his sister Kristen (Dorian Brown), their parents, Ryan’s old dog Sneakers – and up above, a figure that is clearly Wilfred half-hiding behind a tree.

Ryan denies ever making the drawing and accuses Wilfred of making it. With the pair angry at each other, the Jenna/Drew wedding ceremony shows up, along with Ryan’s reconciled girlfriend Amanda (Allison Mack), who is overjoyed to be Ryan’s date. Wilfred is disgruntled that Ryan has reunited with Amanda without discussing his mental health issues, but Ryan vows to do so.

At the same time, James (Eugene Byrd) shows up to warn Ryan that he’s wanted by law enforcement for framing a co-worker for selling the trade secrets of his former employer, an incident that led to the employer’s suicide and the closing of the company. Ryan is shocked and thinks Wilfred did it – Wilfred counters that probably Ryan did it himself.

Ryan musters up the courage to tell Amanda that he and Wilfred talk to each other – and Amanda astonishes Ryan by saying that she and Wilfred talk also. Except … Wilfred says that Amanda doesn’t talk to him, and in fact, she pretends to understand Wilfred when she obviously doesn’t. Furthermore, Amanda confesses to Ryan that she’s the one who sold the secrets and framed the co-worker, ruining many lives. She says she did it so that she and Ryan could run away together. Heartbroken, Ryan comforts Amanda and alerts the authorities, which results in Amanda being held for psychiatric evaluation.

Ryan is so upset that Wilfred comforts him. Wilfred says that he made the childhood drawing to mess with Ryan – Ryan is in good hands with Wilfred. Wilfred leaves for the night and Ryan examines a photo of his family when Ryan was a little boy – only to see the drawing with Wilfred in it in the background of the photo. This means that Ryan, when he was only a child, drew Wilfred before the real Wilfred was even born. But what does that mean?

Since this is the season finale, we’re definitely not going to find out this year. The logical answer would seem to be that Ryan used to have an imaginary friend like Wilfred who he’s projected onto the neighbor’s dog, or – if we want a supernatural explanation – has possessed the neighbor’s dog. Since this is WILFRED, the answer (if we get one) will probably be something far weirder.

In any case, “Secrets” is a good episode, allowing Ryan to be smoothly teasing, as when he weaves in some BATTLESTAR GALACTICA lore to an explanation. Wood, strong throughout, shines in these moments. As Wilfred, Gann gets to be a little quieter and more reflective in places, reinforcing the basic premise that, under all the gamesmanship (and gamesdogship), Ryan and Wilfred really are friends. Mack turns on a dime from sweet and brainy to blithely dangerous with conviction.

“Secrets” also does a deft job of tying up multiple plotlines, with the season-long corporate and Amanda threads converging and paying off in true WILFRED fashion.

The biggest question posed by the episode is whether we’ll get a third season of WILFRED. In its own low-budget half-hour way, WILFRED is the strangest thing on TV, and it would be a great pity if it went away, leaving a strangeness void in its wake.