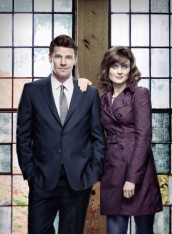 TV Review: BONES – Season 8 – “The Future in the Past” – Season Premiere

Season 8 may seem like a daunting amount for some series, but BONES deftly demonstrates that it’s as limber as ever with a season premiere that combines uncommon personal urgency with its trademark forensic clues and banter. As a bonus, there’s a continuing plot thread that leaves room for renewed high stakes down the road.

In the Season 7 finale, Dr. Temperance Brennan (Emily Deschanel) took her infant daughter Christine and fled rather than being taken into custody after being framed for murder by computer hacker Christopher Pelant (Andrew Leeds). Brennan’s lover/Christine’s father FBI agent Seeley Booth (David Boreanaz) was left distraught and Brennan’s friends and coworkers at the Jeffersonian Institute’s forensics lab had to soldier on without her.

In the Season 8 premiere “The Past in the Present,” It’s three months later. Everybody at the Jeffersonian is spending all of their free time trying to clear Brennan. Booth is finally reunited with his still-fugitive love and their daughter. Brennan, using her deductive skills, has found the bones of one of Pelant’s earliest victims. It’s taken to the Jeffersonian for examination – but Brennan needs to examine the remains herself, and how can she get in there?

The answer to this last is just a wee bit implausible, but the mystery and solution are clever, and all the relationships – between Booth and Brennan, between Brennan and her dad Max (recurring guest Ryan O’Neal), between Brennan and her best friend Angela (Michaela Conlin), between Angela and her husband, scientist Jack Hodgins (T.J. Thyne), between Booth and psychiatrist Sweets (John Francis Daley), between Hodgins and lab boss Cam Saroyan (Tamara Taylor) and even between everybody and Brennan’s replacement, Dr. Clark Edison (recurring guest Eugene Byrd) – are given their proper due. There is time for quirkiness, discovery and affection, mixed with a restrained but continuous “what’s going on here?” vibe as Pelant continues to pull tricks out of his hat and strange personality traits out of his psyche.

In short, Season 8 of BONES hits the ground running, simultaneously setting things right and propelling the new year forward with a strong showing of the qualities that have made it appealing all along.