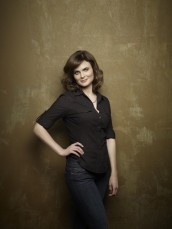 Exclusive Interview: Emily Deschanel on BONES Season 8 and beyond 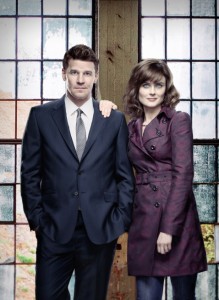 On the morning of Tuesday, January 8, Fox publicly announced it had picked up BONES for a ninth season. The series, currently in the midst of its eighth season at 8 PM on Mondays, concerns both the murder investigations by and personal relationships of Temperance “Bones” Brennan, played by Emily Deschanel, and FBI Special Agent Seeley Booth, played by David Boreanaz. After six seasons of will they/won’t they, Brennan and Booth finally got together romantically. In Season 7, their daughter Christine was born – Brennan’s onscreen pregnancy coincided with Deschanel’s real-life pregnancy with her husband – and Season 8 finds the pair living together while still solving crimes as partners.

The night after the Season 9 announcement, Fox threw a party for the Television Critics Association. A lot of BONES personnel were present, including Emily Deschanel, who was clearly happy with being able to spend more time as Brennan. Here’s what she had to to say to AX.

ASSIGNMENT X: When the prospect of Season Nine came around, did you think, “Yes, absolutely,” or did you have to consider, “Do I want to still do this”?

EMILY DESCHANEL: No, it was, “Yes, absolutely.” Thinking farther than the tenth season is a bigger deal.

DESCHANEL: Yes. I’ve done it for a long time, I know what I’m doing, I know what it is, and it’s easy to continue doing it.

AX: Have you been playing Brennan longer than you’ve done any other job?

AX: Does playing her still feel like regular acting, or does it feel like something else because you’ve been doing it for so long?

DESCHANEL: Well, I think once you play a character for a certain amount of time, you don’t have to think so much about how they would be in different situations – it just comes more naturally to you. So it’s a quicker point from Emily to Brennan. 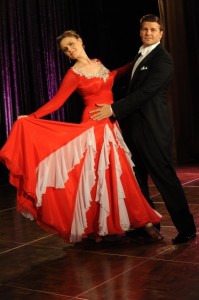 AX: Do you like to way it’s worked out with Brennan and Booth being a couple?

AX: Being a mother both in real life and onscreen – does one inform the other at all?

DESCHANEL: Yes, definitely. Brennan’s a different mother than I am. You don’t see her as much with her child, because that’s not what the story’s about, usually. But I think your instincts as a mother kick in when I’m with the children who play my daughter and I think absolutely it helps to be a mom to play a mom.

AX: It looks like the storyline with Andrew Leeds as serial killer Christopher Pelant, which started in Season Seven storyline and is continuing into this season, may go into Season Nine. Do you like those long villain arcs?

DESCHANEL: Yeah. I think it’s interesting. I don’t know if they always work, and time will tell if they do or they don’t, and I think some work better than others, but I like Pelant as a character. He’s very scary to me, what he’s able to do.

DESCHANEL: Not right now, no. I’m focusing on this and the [real-life] baby. This is my life.

DESCHANEL: We’re continuing to make changes and explore different dynamics and everyone’s working really hard to make each episode better than the last. We’re completely committed to that, and the new pick-up for the next season just gets us excited to tell more stories about these characters and we love doing it.