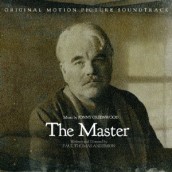 For better and worse, Paul Thomas Anderson is making movies like no one else out there, beautifully done pictures about the ugliness of the human soul. And he’s discovered composers as confrontational as his subject matter, from the ceaselessly surging strings of Jon Brion’s MAGNOLIA to the bizarrely overt percussion of his PUNCH DRUNK LOVE. But nothing resembled the unique milkshake thunderclap of former Radiohead member Johnny Greenwood’s brilliantly experimental approach to THERE WILL BE BLOOD, his at times agonizingly dissonant music capturing the hateful psyche of an oil tycoon. Now Greenwood’s way of playing subtext while outwardly sounding like nothing resembling “typical” film scoring reaches new, mind-bending heights with THE MASTER,  while also managing to somehow be a bit more conventionally listenable in the bargain.

THE MASTER is literally a score that gets inside its characters’ heads, a musical clash between the jumbled percussion of a sociopathic loner and the orchestral refinement of the imposing man who tries to tame him. Greenwood does a striking job of exposing this psychological contrast as long, classical lines mix with unkempt rhythmic gestures that veer from the hayseed to the Arabic, with both styles further unhinged as a result. When it comes to this odd couple’s mind-bending Q & A sessions, Greenwood’s style fuses John Adams with Claude Debussy, a texture of ethereal transcendence and urgent string rhythms that’s truly hypnotic. While poignantly telling us of the undeniable tenderness between these two antiheroes, the composer’s expressionistic gestures are just as centered on their battle for mental dominance, reflecting one man’s explosive, outward violence and the barely contained boiling insides of his seemingly better-adjusted controller. It’s a brilliant use of counterpoint that reveals slave and Master as two sides of the same coin, even if the latter has the organ airs of godhood. Intimately caught in a melodically surreal world between experimental abstractness and pastoral beauty, Greenwood’s “Master” demands much from the listener in a spellbinding way, while not being off-putting about it.

This powerfully focused MASTER does give the listener two bits of conventional breathing room with source cues that get across the movie’s spot-on 1950s setting. While Helen Forrest’s “Changing Partners” is a charming period truffle, Ella Fitzgerald’ swooningly lush performance of Irving Berlin’s “Get Thee Behind Me Satan” from “Follow the Fleet” not only complement an ex-sailor’s attempt at sin washing, but also proves to be the most beautifully romantic song to employ the devil’s name.