Home » once upon a time review into the deep

Storybrooke and The Enchanted Forest establish contact, but at what price? 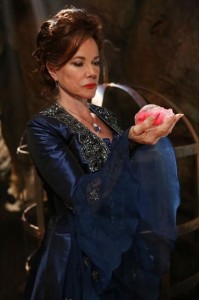 There’s a point at the end of the “Into the Deep” episode of ONCE UPON A TIME where Snow White/Mary Margaret (Ginnifer Goodwin) and Charming/David (Josh Dallas) come together, but can’t really kiss or anything, and Snow complains that even as they will always find each other, they are constantly being torn apart.

You know what? I’m down with Snow on that one. I am so getting tired of this stuck in two worlds storyline. Just rescue Emma and Snow already and move on to some new terror/hassle/conflict. It’s hard enough on the storytelling, in general, because you’re having to tell two to three stories at once, none of which are getting the service they deserve (although I gotta say, one week with the Storybrooke timeline, then one with an Enchanted Forest time line works better than if they’d tried to integrate the stories every week).

Pardon me, is my inner cranky critic showing again? Probably – bouts of insomnia will do that to you. I am so jealous of the whole sleeping curse thread running through the episodes of late. I don’t care if it’s a curse – if it’ll get me some serious shut-eye, bring it on!

We start, however, not with the curse, but with Hook (Colin O’Donaghue) escaping from the beanstalk and the Giant’s lair (see, I told you he wouldn’t be killed). Only the evil Cora (Barbara Hershey) is there waiting for him and decides to let him live because she, as usual, is up to something, as is Hook. He’s pretty focused on his revenge on Rumpelstiltskin/Mr. Gold (Robert Carlyle). The fun thing about Hook is that because he plays everybody, it’s hard to know whose side he’s really on. I expect his own.

Meanwhile, in the Enchanted Forest, now that we know Aurora (Sarah Bolger) is really making contact with Henry (Jared Gilmore), Emma (Jennifer Morrison) is all for Aurora putting in as much sleep time as possible and Snow tells Aurora to have Henry tell Mr. Gold that Cora is trying to get back to Storybrooke and ask him what to do about it. Which she does, and Henry tells Regina (Lana Parilla) and David.

I did love this next scene. Granny (Beverley Elliot) is serving Gold and Belle (Emilie deRavin) lunch when Regina comes in with David. Okay, there’s the line where Gold tells Belle that condiments are this world’s best magic – and if you’re talking about a good hand-made mayonnaise, I totally agree. But because there is obviously no love lost between Gold and Regina, Granny decides to clear the diner. Well, Regina insists she’s come to make nice, more or less, since Cora’s coming to town and she’s probably the worst thing they’ve ever faced. Gold insists he can defeat her, but Regina points out he has a weakness now – someone he cares about. I don’t think Regina knows about Gold’s long-lost son Baelfire, so I’m pretty sure she’s referring to Belle.

After a quick scene in the Enchanted Forest, where Mulan (Jamie Chung) insists that her first priority is to protect Aurora, Henry agrees to go back to the firey netherworld and Gold puts him to sleep with a fairy tale about how Snow and Charming over-powered him with a magic quill. Only it wasn’t a quill, it was magic ink from a dangerous squid that Rumpelstiltskin/Gold left in his cell back in the Enchanted Forest before the curse brought everyone to Storybrooke.

The only problem is that while Henry is trying to tell Aurora, she gets sucked away, mostly because the people that Cora had killed in the fairy world post-curse encampment have now been reanimated by Cora and are now attacking Snow, Emma and Mulan. Aurora gets captured in the attack and in a later scene, Cora explains that she is using Aurora as a hostage to get the compass that will take her through the portal to Storybrooke. Cora also tries to bribe Aurora with bringing Prince Phillip back, since she can convince wraiths to bring back souls. Ooo. Do we spot a set-up for a later episode?

Ah, but there’s a problem in Storybrooke – Henry’s arms are getting pretty burned up in all that fire in the netherworld. So David and Regina are not about to let him try again. David volunteers to go under the sleeping curse – guess he’s got insomnia, too – and Gold sets it up. Lovely moment with Henry and Regina as he asks about about whether she’s been using magic and she says she hasn’t except for two times. Looks like Regina is really trying to reform herself.

Back in the Enchanted Forest, Hook helps Aurora to escape, but you know he’s up to no good by doing so. Or is he? Nope, he’s not. Snow realizes she has also been under the sleeping curse and can go to the netherworld if she can sink into a really solid sleep, which requires some new poppy dust and more trecking through the woods so Mulan can find a poppy. Emma’s taking a turn at freaking out, blaming herself for the situation, and Snow one-ups her big time and points out that blame isn’t going to change anything. It’s all about having faith.

Henry, for his part, isn’t so thrilled that David is going under the curse, but David insists that it will be all right and that Snow will find him and awaken him because, “That’s the kind of faith that runs in our family.” Except, as noted above, it doesn’t exactly work out that way. David connects up with Snow, but because she’s not really there, they can’t touch. So David is stuck in the sleeping curse and Snow wakes up and is freaking out. Only this time, it’s Emma’s turn to encourage Snow to hang onto the family faith thing.

Oh, Hook is definitely playing both sides. Not only does he confront Cora, he gives her Aurora’s heart, which Cora uses to control Aurora, telling them where to go, etc. Hmmmmm. This does not look good, but we won’t know much about how it plays out until next week. If we’re lucky.

Article Source: Assignment X
Article: TV Review: ONCE UPON A TIME – Season 2 – “Into The Deep”

Tags: ABC, Into the Deep, Jennifer Morrison, Lady of the Lake, Once Upon A Time, Season 2, Snow White, The Crocodile, The Doctor, review