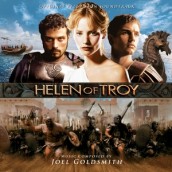 As if laying tributes before an unsung Greek god, Buysoundtrax has paid tribute to the recently passed Joel Goldsmith with releases of two of his best works, beginning with an improved re-issue of MOON 44, and now continuing with what just might be the composer’s finest work with 2003’s HELEN OF TROY.

An Emmy-nominated TV movie that hit shores the year before Brad Pitt and James Horner invaded the multiplex with TROY,Goldsmith’s score certainly has the big screen power to become the face that launched 1,000 ships for one of mythic history’s most famous, and ill-fated love stories. Not only does Goldsmith’s authentic use of Middle Eastern percussion and instruments solidly ground the tale in Greek history, but he also brings in two memorable themes for the anger of the Trojan War, and the passion that spawned it. It’s a mix of militarism, haunting ethnic stylings and fate-crossed, flute-topped romance that definitely marks Joel as the son of Jerry, yet very much as a composer with his own voice for this alternately epic, and intimate spin on musical legend. It’s a score whose high quality makes one wish more than ever that Joel Goldsmith had the opportunity, and recognition to write more like it, especially when his talents were alive for Hollywood to see- unlike the wooden horse that stood for mythic history’s most notorious sucker punch.

Click on Link: To Purchase HELEN OF TROY soundtrack