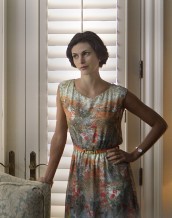 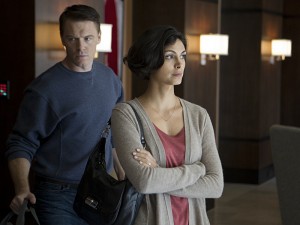 The first season of Showtime’s HOMELAND received six Emmy Awards, including Outstanding Drama, Outstanding Actress for Claire Danes and Outstanding Actor for Damien Lewis. Now in its second season, Sundays at 10 PM, HOMELAND, adapted and produced for American television by Howard Gordon and Alex Gansa, keeps up its breakneck pace. Danes’ CIA agent Carrie Mathison is more worried than ever about a terrorist attack onU.S. soil, due in part to her complicated relationship with Lewis’ Congressman Nicholas Brody. Brody was a U.S. Marine who was captured and spent eight years in the hands of a terrorist; when Brody was rescued, he was – as Carrie suspected – secretly in league with his former captors.

Brody now has switched sides a few times, and that’s not limited to his CIA/terrorist affiliations. He’s also married to Jessica, played by Morena Baccarin, the Brazil-born, California-raised actress of FIREFLY and V fame. Jessica is aware that Brody had an affair with Carrie and that he’s been keeping secrets – at the same time, she tries to retain sympathy for all that her husband has been through. In an extraordinary sequence in HOMELAND’s Season 2 opener, Jessica is first exasperated with teenaged daughter Dana (Morgan Saylor), then angry when Brody sides with their daughter, then both stunned and incandescent with rage when Brody says that he has in fact converted to Islam, something he confided to Dana but not to his wife.

Baccarin took some time to discuss all of the above and more with us.

ASSIGNMENT X: In the scene where Jessica confronts Dana about Dana saying at school that Brody is a Muslim, were you calibrating the anger there, so that you could get even angrier later, when Jessica finds out that Brody actually has converted to Islam and has been praying in the garage?

MORENA BACCARIN: No. I give the scenes my all and hope for the best in that way. I just take each moment as it comes. I don’t know what’s going to happen in the season, so there’s no way to anticipate and it’s not like in V, where I have to save up my emotions and then release them all at once [laughs]. On this show, it’s just dealing with the material that’s given to you. I’m sure I’ll have other hard moments coming up.

AX: There always seems to be a lot going on emotionally. When Jessica is angry at Dana, she’s a little surprised at the specifics, but she’s not that surprised about Dana acting up at school. But when Jessica finds out what Brody has been keeping from her, she’s not just furious, she’s incredulous. 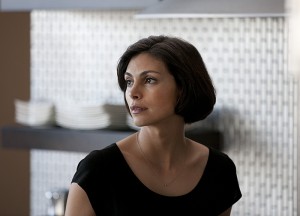 AX: Can you compare acting opposite Damien Lewis with working with Morgan Saylor and Jackson Pace, who play your children?

BACCARIN: Yeah. It’s great fun, especially when we’re all around the set together, it’s a real blast. Having kids [laughs] when they’re not yours, especially because you can send them home, it’s really fun. We have a nice time together. Damien’s and my scenes together are really intense, so the nature of our relationship is just different based on the kind of work that we have to do together. He’s really a very giving actor and we’re just having a really nice time together.

AX: Some of the scenes call for Jessica to be intimate with Brody and also with Brody’s former best friend Mike, played by Diego Klattenhoff, who was Jessica’s lover while Brody was presumed dead. Did you have any hesitation about doing those scenes?

AX: Is it true that you and Claire Danes went to junior high together?

AX: Do you remember each other from those days?

BACCARIN: Yeah, we do. We had homeroom together for about a year-and-a-half. I remember she had orange hair or pink hair at one point, after she got back from doing a pilot [laughs], and we actually were just bonding over the fact that we had the same bully in junior high.

AX: Have you ever worked together in the interim, or is working on HOMELAND together the first time you’ve seen each other since then?

AX: Did you do any other projects between Seasons 1 and 2 of HOMELAND?

BACCARIN: I did. I did THE MENTALIST, I did THE GOOD WIFE and I did a little movie called OLD DAYS. It’s sort of a high school reunion kind of movie. It’s directed and written by Michael Rosenbaum [Lex Luthor in SMALLVILLE] and it’s a comedy. It was really fun to be silly [laughs]. It’s about a guy who goes home and realizes he’s in love with his high school sweetheart and she’s engaged to somebody else and about to be married, and he’s sort of soul-searching and it’s great.

AX: Is the high school sweetheart you?

AX: Do you get to be silly?

AX: There was a tenth-year anniversary reunion panel for FIREFLY at Comic-Con this year. You couldn’t make it because you were working, but is it true you sent over a videotaped message for the event?

BACCARIN: Yes. It wasn’t shown, unfortunately, on the panel, but I posted it on Twitter after. I sent a little video, greeting everybody, saying hi and how much I missed them and how much I wished I would’ve been there.

AX: Do you still get together with the other FIREFLY alumni?

AX: When you watch HOMELAND, do you get excited to see the scenes you weren’t in?

BACCARIN: It’s amazing to watch, just because obviously, I wasn’t inIsrael [where theBeirut scenes were shot], so it’s incredible to see the stuff that was shot that I wasn’t privy to. So that’s such a gift and exciting to see all the things that you’re not in.

AX: And what would you most like people to know about HOMELAND right now?

BACCARIN: [laughs] That the fast-paced ride that we started last year is not over and keeps going full on.