The actress talks playing a mom and a surrogate 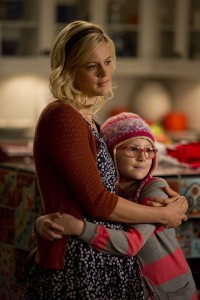 In NBC’s THE NEW NORMAL, created by Ali Adler and Ryan Murphy, Midwesterner Goldie Clemmons, played by Georgia King, takes her young daughter Shania (Bebe Wood) and strikes out for California in the hopes of making a better life for both of them. This so upsets Goldie’s conservative grandmother Jane (Ellen Barkin) that the older woman follows them to the West Coast, hoping to browbeat Goldie into returning to their home state.

Then Goldie meets gay couple David Murray (Justin Bartha) and Bryan Collins (Andrew Rannells), who long to be parents. Goldie agrees to serve as their surrogate, carrying the fertilized embryo of David’s sperm and a donor’s egg. Shania is intrigued – and Jane is beside herself with horror.

THE NEW NORMAL has done well enough in its timeslot – Tuesdays at 9:30 PM  – that NBC has ordered a full season of episodes.

This suits actress King just fine. Despite her sterling American accent, King actually hails from Edinburgh, Scotland. Her other screen work includes Lady Teazle in the film THE DUCHESS, Pet Gowan in the 2008 miniseries LITTLE DORRIT and Lady Amelia Heartwright in the upcoming feature AUSTENLAND.

King is clearly having a good time just hanging out with colleague and pal Rannells at a party NBC is throwing for the press, but she agreeably sits down for an interview about what’s normal for her these days.

ASSIGNMENT X: Did you learn to do an American accent in order to play Goldie, or did you already have that in your backpack?

GEORGIA KING: I already had it in the backpack on the way to the airport, but I think so many great programs are made in America, I feel like if you want to be a part of it and you’re not American, you have to adapt. I mean, I’m a huge fan of things like SIX FEET UNDER and TRUE BLOOD and all the Alan Ball projects and Ryan Murphy’s projects, and honestly, the dream was to be a part of one of these, so I can’t believe I’m here, but yeah, the accent thing has always been quite comfortable for me, so I don’t really think about it that much, I just kind of am more focused on Goldie as a character.

AX: How did you feel about her when you first read the script?

KING: When I read the script, I was really excited by such a broad spectrum of characters. Obviously, the gay couple are very prominent, and Ellen is eye-watering at times with her lines. But it really looks at so many different types of people in such detail and asks questions about all sorts of different types of people. I think it’s what I found exciting about [THE NEW NORMAL].

AX: How it playing someone who is both a mother and a granddaughter?

KING: It’s wonderful. I have very strong maternal instincts anyway, so I adapted to playing a mother very easily. Bebe’s incredible and we spend a lot of time together off-set, and I’m very, very fond of her, and I love spending time with her. I think that drive to protect her daughter and create a a better life for her daughter is really interesting, so it’s great. Shania’s character gives Goldie the strength and the courage to make a better life for both of them. They have a really extraordinary relationship, and Shania is like a weird oracle of knowledge for Goldie often. And in real life, Bebe is pretty much the same for me.

AX: Do you want to do more scenes with Andrew Rannells, as the prospective father who puts this all in motion?

KING: Yeah. I just want everyone to know that – best buddy forever.

AX: And working with Justin Bartha as the other dad?

KING: I would like people to know that it’s about family and unity and humanity, and I hope it’s very relatable for a lot of different types of people.