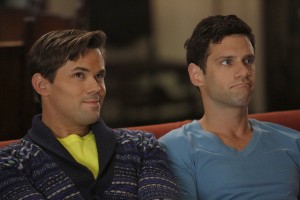 On NBC’s THE NEW NORMAL, which premieres tonight at 9:30 PM after several previews, Andrew Rannells and Justin Bartha play Bryan and David, who turn to single mom Goldie (Georgia King) to be the surrogate mother for their child. Created by Ali Adler and Ryan Murphy (the latter of GLEE and AMERICAN HORROR STORY), the half-hour comedy also stars Ellen Barkin as Goldie’s ferociously disapproving grandmother, Bebe Wood as Goldie’s accepting young daughter and NeNe Leakes as Bryan and David’s friend and assistant.

Rannells is new-minted Broadway royalty, having originated the role of Elder Price in the mega-hit musical THE BOOK OF MORMON. Previously, he was also in the original cast of JERSEY BOYS and appeared as Link Larkin on HAIRSPRAY. The Omaha, Nebraska native has also worked a lot in television, including a lot of voice work on animation, including POKEMON and YUGIO, but THE NEW NORMAL is Rannells’ first onscreen gig as a series regular.

ASSIGNMENT X: There have been gay characters and even gay couples on television before, but you and Justin Bartha are two of the first, at least on broadcast, where the fact that you’re both sexy is part of what’s front and center. Do you feel any sort of responsibility comes with that, or do you just think, “Cool”?

ANDREW RANNELLS: Oh, absolutely. I think it’s very exciting to get to be a part of that, and I feel like there’s definitely a responsibility, but I feel like if anybody would handle it properly, it’s going to be Ryan Murphy and Ali Adler. So I think we’re in good hands.

RANNELLS: On Broadway? Well, I feel like you have the opportunity to be obviously much more topical on television, given the schedule and the time it takes to produce the [Broadway] shows. Even the most fast-tracked musicals still take at least a year and a half to get to Broadway – and I’m making that number up. But it can still take awhile. So [doing television] is very exciting, to get to be part of something that’s going to be political and topical. That said, THE BOOK OF MORMON, I feel like I was very fortunate to be a part of something that really seemed very current and very hip, for lack of a better word, very topical. And the transition was good. I love musical theatre and I love doing Broadway, but I don’t miss that schedule. It’s nice to have weekends again and things like that.

AX: What did you know about THE NEW NORMAL when you first met with Ryan Murphy about it?

RANNELLS: I personally am very grateful for Ryan Murphy always sort of keeping an eye on Broadway. He’s always keeping on eye on New York in a way that a lot of creators on this [West] Coast maybe haven’t. Look at the cast of GLEE, [Murphy] pulled a lot of those folks from New York. I feel fortunate to be part of this new group. But I like the trend – I can say that much. I was very excited that Ryan was willing to meet with me, and immediately, even though there wasn’t a script and he just gave me a very general outline of what the story was, I knew that he was the person to tell the story right [and] that I was going to, I think, be very happy to be a part of telling the story. So even though there was very little information about the show at that point, I immediately jumped on board, because as a gay man, it’s hard to find projects that you can play a gay man [who] feels like a fully-developed character that’s not just the best friend or just the bitchy boss, and this is a fully developed person that I get to play. And certainly the gay is a big part of it, but the gay is just a fraction of what I get to do on the show.

AX: In terms of your own performance style, do you have a preference for one or the other?

AX: Since she’s standing right here, how is it playing off of Georgia King, who plays the woman who will be carrying Bryan and David’s baby.

RANNELLS: Oh, great. I have to say, my favorite scenes were our final scene [in the pilot] that I had with Georgia – that was one of my favorite days of the whole pilot. I’m looking forward to doing a lot more with her. [And] Bebe [Wood, the young actress who plays Goldie’s daughter Shania] keeps us all on the straight and narrow on set as well. She is a great grounding force.

AX: If this isn’t too spoilery, can you talk about what the relationship is like with all three – Bryan and David and Goldie?

RANNELLS: To be honest, the story is sort of unfolding to us as much as it’s unfolding to you, but we’re very excited.

AX: THE NEW NORMAL has the distinction of being the first show of the 2012/2013 season to be boycotted, by an NBC affiliate station in Utah – although a different station will be running it there. Any thoughts?

RANNELLS: I was very excited that I was mentioned by first and last name in the boycott. It was a real honor and a real treat. It’s my first boycott.