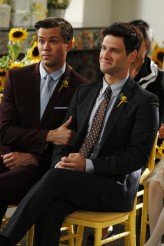 A pretend wedding gets Bryan all in a dither

Ryan Murphy is once again at the helm of this new episode of THE NEW NORMAL, and with “Bryanzilla” we have a return to the rigid stereotypes and beating over the head of messages that the series started out as. The idea for the episode is cute but absurd with Shania (Bebe Wood) getting pretend engaged and wanting to have a pretend wedding. Enter Bryan (Andrew Rannells) with clearly plenty of time on his hands regardless of producing and writing his own series. So what was once a pretend wedding is now a full blown pretend wedding complete with food, invitations, a dress, etc. Who really does this stuff?!

Nana (Ellen Barkin) of course comes in like a house afire as usual and takes a big steaming dump on the whole proceedings, and of course it suddenly becomes more about gay marriage and what constitutes a marriage in the eyes of the law. I knew we were going to get there sooner or later, judging from past episodes, I just wasn’t sure if it was going to be the direct sledge to the head route so often taken. As it turns out a sledge was deemed necessary and the audience once again is beaten about the head and shoulders with the issue.

Some of the jokes are still funny, but I’m kind of sick of the theme which seems to be gay with more money than sense. This show could be a lot more, but even with some really funny and clever writing, and some very touching scenes between David (Justin Bartha) and Bryan; this series still just hasn’t found its equilibrium.

Shania’s dress was lovely and inspired, and I want to just take a moment to compliment whoever made it in the wardrobe department. It was a physical reality of her drawing, and it was really quite spectacular for a little girl.

I know this show was slated to be political right out of the box, with the million moms protesting it’s very existence, but can’t there be an episode, just one maybe, that doesn’t have a black and white agenda and something to “teach” the audience? This series is fun, but I’m really afraid it’s just a bit too much right wing brow beating for Middle America to really want to tune in each week.

TV Review: CAMELOT - Season 1 - “The Sword and the Crown”
TV Review: ONCE UPON A TIME - Season 1 - "Desperate Souls"
Exclusive Interview: Stephen Colletti climbs ONE TREE HILL for its fin...
TV Review: BONES – Season 11 – “The Last Shot at a Second Chance”