The actor talks playing a complex character - and working with wires 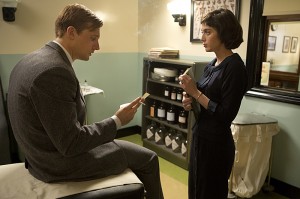 Life has gotten very complicated for everyone in Showtime’s MASTERS OF SEX, Sundays at 10 PM. The drama, which has its first-season finale December 15 and has already been renewed for a second season, chronicles both the research and personal lives of Dr. William Masters (Michael Sheen) and Virginia Johnson (Lizzy Caplan) as they investigate human sexuality in the 1950s, when their quest was truly revolutionary.

Teddy Sears plays Dr. Austin Langham, who as part of the Masters and Johnson study allows himself to be wired up to a graph and observed while having sex, although outside the study, he’s had an affair with Margaret Scully (Allison Janney), wife of powerful Dr. Barton Scully (Beau Bridges).

Sears has portrayed a range of professionals in his television work, playing lawyers in RAISING THE BAR, LAW & ORDER: SVU and THE DEFENDERS and a detective in 666 PARK AVENUE, as well as a sexually active ghost in the first season of AMERICAN HORROR STORY. The Washington, D.C.-born, Maryland-raised actor also appeared in the feature film A SINGLE MAN opposite Colin Firth.

At an event sponsored by Showtime for the Television Critics Association, Sears talks about the idiosyncratic demands of his work on MASTERS OF SEX.

ASSIGNMENT X: When you got the script for MASTERS OF SEX and read what would be required of you, did you have a moment of thinking, “Do I want to do this?”

TEDDY SEARS: I was shooting AMERICAN HORROR STORY at the time. That was Season 1 on that one, October 2011, and I had no hesitation. Maybe partly because I was playing a dead gay sex addict, for lack of a better description, on that show, and I loved it immediately. I wasn’t familiar with [MASTERS OF SEX show runner] Michelle Ashford’s work, but I know she wrote for THE PACIFIC and I know she wrote for JOHN ADAMS, and I thought, “Well, this is great.” And then the writing of the pilot itself showed incredible promise, and I liked the character. He was this guy that was a Harvard-educated guy with a sense of fun, who clearly enjoyed being a doctor and he enjoyed everything that came with it. And I read this and I thought, “Oh, well, this is lining up for me very nicely.” So I was very enthusiastic – I couldn’t wait to get in there.

AX: Is your character Dr. Austin Langham a real person?

SEARS: My character in the pilot was named after a real person, and they decided to take elements of that actual human being’s life and fictionalize it a little bit just for the sake of protecting his anonymity, as well as make it a little bit more dramatically fun. But most of what I’m doing is actually based on another human being. They had to change the name, though.

AX: How would you describe Austin?

SEARS: I’ll simply say I have a feeling that every decision he’s made in his life has been to show everyone out in the world to convince them, including himself, that he is as awesome as he wants to believe he is, that he is a successful and in charge and cock of the walk type of guy. Really, I think that all of that masks some very, very large insecurities which we begin to see in Season 1. I don’t yet know who this guy is, but it’s really fun to get a script and to say, “Oh, wow, I do that this time. Okay. Well, that’s something else I didn’t know about myself,” and to just go from there and see it all ricochet out into the distance. So I’m excited to see where it goes, if we can keep doing it.

AX: Did you have any flash of meta when you were filming the sex scene where your character is wired up for sex of, “I’m playing somebody who on some level knows he’s being watched, and I’m actually being watched by people who are being watched by a camera, and it’s kind of infinite regression”?

SEARS: Yes. It’s impossible to do that scene and not know that we’re being observed. The wires, for one, the fluorescent lights, the hospital bedding, the whole sterile environment – it’s sort of an interesting balance between being as present as possible in the act of sex itself, and also knowing that I’m on display somehow. All of my vitals, et cetera, are being monitored here, and I didn’t have to perform for them, but I could see how that could be something that could cause a problem down the line. There was a moment, I will say, where I was very concerned with how hot it was getting in the room and the wires falling off. That was sort of in the forefront of my mind. And [director] John Madden [was saying], “Come on, we’re on Hour Number Four of this scene, let’s wrap it up, man.”

John Madden would say shooting the pilot, “I want to protect your modesty,” which was very great, having someone like him, sort of the nice grandfather as he’s like, “Grab her bum and put your hand on her nipple.” That was a little bit strange. But I have to say, I was embarrassed. I worked on AMERICAN HORROR STORY with Ryan Murphy – that was my first sort of getting naked on camera. And so even though the seal was broken, I had never had to have sex on camera.

The environment that was provided [on the MASTERS OF SEX] set was very caring. It was a scalable crew, and we just got down to the task of getting it done. That said, though, in the pilot, I’m having sex in the experiment with Helena Yorke, who plays Jane. We had to do that scene a few different times because John had to shoot it from a number of different angles. And we’re all wired up, and the wires after every take looked like a bird’s nest. The wires were all over the place. And so we had to unspool the wires and do the whole thing over again. It gets decidedly unsexy after a while, but it was a lot of fun. It was a very safe environment.

AX: Even with the discomfort, you have kind of a playful interaction with Helena York in many of your scenes together. Did the two of you approach the scenes with that sense of playfulness?

SEARS: Yes. I think because it’s such an awkward environment to begin with – we’re two virtual strangers in life, we’d simply met the day before, and we’re complete strangers the day our characters are meeting to take part in the experiment – that we had to have sort of a sense of fun, I think probably to eliminate the tension, more than anything. There was a moment when we’re beginning to have sex where she says something like, “Oh, I think we did meet before at a cocktail party,” and I say, “Oh, yes, you were the one with the clothes on.” You can’t help but sort of lighten the mood because it is so strange and it’s such a strange environment we’ve signed ourselves up to play in.

AX: Your character has sex both within the study, wired up, and outside the study, for social/sexual reasons. Is there a difference as an actor in playing sex scenes where it’s sex for the sake of whatever is going on between the two people, versus sex that is done for the purposes of the study?

SEARS: You know, this is a man who gets to have sort of sanctioned sex away from his wife. He has a family and he’s able to compartmentalize. What happens at the hospital [where the study takes place] happens at the hospital, and whatever happens at home happens at home. I think he’s given the green light, in the pilot especially, to take part in this study and even say something like, “This feels like it’s Christmas morning or something.” So I think for this character specifically, he’s just extraordinarily happy to be having sex with someone other than his wife. And so, as an actor, I have to take all of that into consideration. This is not something I’m doing because I know that little machine is ticking out the little [readout] and we need to make sure we hit all of our four stages [as defined by the study]. This is just good, old-fashioned sweaty fun.

AX: How much interaction do you have with the writers?

SEARS: They’re very available. I knew that I could get Michelle or [executive producer] Sara [Timberman] in an email, which would have come back to me right away, but I could actually go to their office and talk to them in person.

SEARS: I’m crossing every finger that it draws a big audience. I’m extraordinarily proud to be a part of this show. I’m just really happy to be handed an armload of material to play with, and I hope that I did it justice. That’s it.