The exec producer/show runner talks about her magical new series 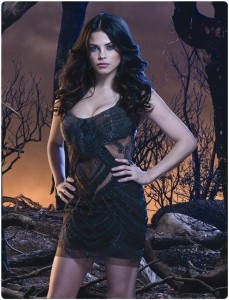 Jenna Dewan-Tatum in THE WITCHES OF EAST END | ©2013 Lifetime

Based on the novels by Melissa de la Cruz, Lifetime’s WITCHES OF EAST END follows the fortunes of the magical Beauchamp women – matriarch Joanna (Julia Ormond), her shape-shifting sister Wendy (Machen Amick) and Joanna’s daughters Freya (Jenna Dewan-Tatum) and Ingrid (Rachel Boston). Joanna and Wendy are from a realm other than our own; Joanna is cursed to see her daughters die as young women and then give birth and raise them anew. As a mother, she longs to see them live out their lives, but given the scrapes Freya and Ingrid get into, Joanna has a tough time protecting them. The series has its first-season finale on Sunday, December 15, at 10 PM, but has already been renewed for a second season.

Executive producer/show runner Maggie Friedman adapted WITCHES for television. Her previous credits include writing on WASTELAND, ONCE AND AGAIN, DAWSON’S CREEK, the telefilm SPELLBOUND and adapting and producing ABC’s short-lived TV series EASTWICK, based on John Updike’s THE WITCHES OF EASTWICK.

At a reception hosted by Lifetime for the Television Critics Assocation, Friedman says she’s quite aware of the wealth of witches in her work.

MAGGIE FRIEDMAN: It’s funny, when this project came to me, I did hesitate for half a beat, because I knew – I was like, “Really? Am I going to do WITCHES OF EAST END now?” But then I read the book and fell in love with the story and it is so distinct from [EASTWICK] – yes, the title is similar and yes, there’s a magical theme, but the characters and the story are their own universe, and it’s something completely different, and I just really wanted to tell this story. I knew I was going to get some flack or questions about that, but I was like, “Screw it, this is a show I want to do.”

AX: It sounds like there’s an interesting mythology as far as where Joanna and Wendy come from in the first place. Are we ever going to meet Freya and Ingrid’s dad?

FRIEDMAN: I don’t think I’m allowed to talk about it, but there is a dad, and we will learn more and more. There’s a lot of mythology and there is a very rich back story that we’re going to get to tell. What’s great is, because they’ve been alive so long, we spend time in the past and learning about the past, so we will find out answers to all the questions about where they come from and what it means and who they are.

AX: So you have a lot of flashbacks to different periods?

FRIEDMAN: We do. We show brief flashes, we see photos of them in different eras, but we also have a whole episode that takes place in the past where we learn back story to what’s happening now. What’s great is, our actresses look so great in period costume, I just want to keep dressing them up in different eras, and the characters have so many things that they’ve been through over the centuries that it’s really fun to be able to tell those stories – really tell those stories, not just talk about them.

AX: Is that a production design challenge, or is that fun?

AX: Can you talk about how the witchcraft on this show differs, if it does, from EASTWICK or, for example, VAMPIRE DIARIES?

FRIEDMAN: Yes. It’s definitely its own distinct world. With each of our women on the show, their powers come from their unique personalities. Freya’s powers come from her heart. She’s a very loving character, she’s a very passionate character, she’s very sexual, she’s a bartender, so she can mix drinks that make you fall in love or find your soul mate, and the Ingrid character is very intellectual, she’s very academic, so her powers are very much about her mind, and mind control, and writing spells. And then the Madchen Amick character, who can turn into a cat, her powers come from instinct, because she’s like an animal, and it comes from the gut. And then Joanna is kind of the mother of everyone, she’s the whole package. She’s very powerful and very ancient and has wisdom through the ages. So what I love about the powers on the show is that each woman embodies a different aspect of womanhood and female empowerment. That’s really cool.

AX: To ask another mythology question, because Freya and Ingrid keep dying in each incarnation, is there an age they cannot get beyond? That is, are they going to die of pneumonia if nothing else gets them?

FRIEDMAN: Well, what Joanna has decided and discovered is that they always die while using their powers, so they always die through magical means, which is why she made the decision in this lifetime to keep them away from magic, because she says, “This is the way to give them a normal life and a real natural lifespan.” She wants to see them get married and have babies and live full lives, so she wants to keep them away from magic. Of course, in the pilot, they discover that they’re magical, and her fear is, if they start to use their gifts, will it kill them?

AX: Does the use of magic weaken them?

FRIEDMAN: No, nothing like that. It’s more that that’s what always happens to them, is that as they’re using their magic – because magic is inherently dangerous in this world, and it pits you up against other people who are magical who might want to do you harm. Joanna gives birth to them over and over and over, and they don’t remember. Joanna is this person who remembers each incarnation of her daughters, and that’s her pain. She’s had to watch them die and then give birth to them again and again and again. She has her own special gifts, but the girls – they’ve lived over many centuries, and they have no recollection of it.

AX: What were your casting discussions like with Lifetime?

FRIEDMAN: We really wanted just people that we thought were good actors who felt like they belonged to the role, and who fit who the characters were. [The actors are] each so distinctive and they each embody their characters so perfectly, it almost feels like it was fated for them each to land in that role. We all sit on set and we can’t believe how much they each mirror the character that they play. It’s pretty cool.

AX: Did you feel that EASTWICK got a fair shot?

FRIEDMAN: Obviously, I’m biased, because I was involved in the show, and so I would have loved for it to continue, and I felt really excited about the stories we were telling. I think especially as the season went on, we really hit our stride. It was unfortunate that it got canceled, but one of the things about being a TV writer is, that’s par for the course. You work on shows, they get canceled, you pick yourself up and you move on and you find other stories to tell that you’re excited about. So I can’t dwell on it, because I’ve worked on so many shows that have come and gone, and you just keep going and you hope that people find your show and love it as much as you do.

AX: You’re one of Lifetime’s few scripted series. Is there any particular advantage or pressure to that?

FRIEDMAN: There’s always a pressure when you are running a show. It’s a job with a ton of pressure, but I make sure that I don’t think about it, because the end product that gets on the air, the marketing of it and whether or not people watch it, in a weird way, that has nothing to do with me. All I can do is write the scripts, produce the show, be on the sets, give my input, decide on certain creative aspects, and then it’s sort of like Joanna with her daughters. You have to put it out into the universe and see how it’s received and hope that people love it and that people watch it. But if I were to think about the pressure and that aspect of it, I would drive myself crazy, so I try not to.

AX: What would you most like people to know about WITCHES OF EAST END going forward?

FRIEDMAN: I would want them to know to tune in. Because once you are in, you are hooked. You just want to see what keeps happening. And each episode gets better, more exciting. The stories, I feel like they’re just cooking, the characters are jelling really well, and I feel like it’s one of those things that it has the potential to be very addictive. And so I’m saying give it a shot and hopefully you’ll be hooked.