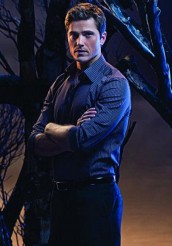 Exclusive Interview: Eric Winter is under the WITCHES OF EAST END spell

The actor talks about working on Lifetime's magical series 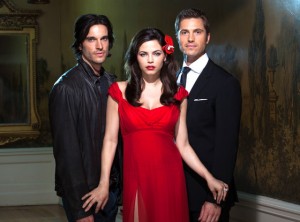 Eric Winter was brought to the attention of the WITCHES OF EAST END producers, according to Lifetime executive vice-president and general manager Rob Sharenow, because the actor attended a Christmas party with his wife Rosalyn Sanchez, who is a regular on Lifetime’s DEVIOUS MAIDS. Sharenow tells the press, “All the Lifetime women thought he was so hot that we had to have him on a show. So there you go.”

Has Winter heard this explanation for how he wound up on WITCHES? “I pitched that introduction,” Winters jokes. “I found out about it actually a little bit earlier today. Very flattering. It was an amazing way to be brought into this group, and I think I had fans there [at Lifetime] from previous work I’ve done as well, and it was a really cool way to be brought in.”

On WITCHES, now in its first season on Lifetime Sundays at 10 PM and already picked up for a second season, Winter plays the wealthy and charming Dash Gardiner, who is engaged to Freya Beauchamp, played by Jenna Dewan-Tatum. What Dash doesn’t know is that Freya, like her sister Ingrid (Rachel Boston), their mother Joanna (Julia Ormond) and Aunt Wendy (Madchen Amick), is a witch. Dash, however, becomes aware that he faces a rival for Freya’s affections – none other than his brother Killian (Daniel DiTomasso).

Winter played Rex on DAYS OF OUR LIVES from 2002 through 2006. He’s had previous brushes with TV witchcraft in a guest shot on CHARMED, as well as encountering vampires in a recurring role on MOONLIGHT. Other recent recurring gigs include THE MENTALIST and GCB. The IMDB says he’s also in the upcoming feature COMET.

At a party thrown by Lifetime after the WITCHES Q&A session at the Television Critics Association press tour, Winter is happy to elaborate on what he’s done on EAST END.

ASSIGNMENT X: Does Dash have any special abilities, or is he just an innocent in this?

ERIC WINTER: I’d say he’s very innocent – right now [laughs]. I obviously don’t know everything and it’s a very hush-hush plot throughout, but what I do know is that my character is very, very complex and there are a lot of sides to him and the relationship with his brother is a lot more than it seems. The love triangle isn’t just this typical, “Hey, I’m pining for her, he’s after her, by the third reel, is he the third wheel?” No, it’s a genuine journey that she’s on and we each supply her with certain needs that are valuable to her. At the same token, we have these women with powers, and we have these guys right now who appear one way and I think we’re in for something interesting.

WINTER: What I can say is, in the pilot, early on you see a certain side of each of us. And one of us is painted maybe a little bit more of a polite, regal way and the other one is a little more the bad boy who seems to come in and cause a problem. I think that journey’s going to be an interesting ride. I don’t think it’s going to be what you see.

AX: Which are you?

WINTER: Right now, I am the JFK Junior-esque – as I’ve been told – type. I’m a doctor that helps people across borders.

AX: And Dash is from an upper-class background …

WINTER: Moneyed family. My brother and I both came from money. He refuses to be a part of it. I’m a big part of it, but not so conforming to that lifestyle. I’m all about appreciating everybody.

AX: If you’re playing a doctor, is there anything you’ve had to learn how to do in order to play the role, like give stitches or injections?

WINTER: I haven’t had a scene yet as the doctor in action, but I’ve played doctors in the past and actually was an aspiring doctor growing up, I was a pre-med student, so I’ve been through a lot of studies and a lot of the sciences behind it, so it’s something I gravitate towards.

AX: Did you call your folks when you got this role and say, “Good news, I’m finally a doctor”?

WINTER: Yeah. I’ve done that too many times, now they don’t take me seriously. When I did the movie THE UGLY TRUTH, I was also a doctor in that movie with Katherine Heigl and Gerry Butler. I’ve had a couple of nice moments where I was a doctor.

AX: As a viewer, do you like supernatural stories?

WINTER: Yeah. I am definitely a type that loves them. Growing up, I was fascinated by it. So to watch a show, especially done in a very smart way, is something that grabs my attention, because I always like to imagine, “What if?”

AX: WITCHES OF EAST END is set in the U.S. but shoots in Vancouver. Is that local for you?

WINTER: No, I’m an L.A. native, actually, born and raised here. So I’ve worked inVancouver before, but this is the first time I’ve been there that long.

AX: Because it’s a heavily female cast, are you feeling at all isolated?

WINTER: No, because I’m very well-integrated with the story, which is good. I’m not just a boyfriend, I’m engaged to join into this family. The way it’s set up is, I’m a very big part of Freya’s life with her family. And then it’s nice, because I have my own family on the side that comes into the picture.

AX: Lifetime has done relatively few scripted series, and WITCHES OF EAST END is its first genre show. Do you feel that gives you any particular kind of advantage or disadvantage?

WINTER: On this network? I think we’re coming onto this network at such a hot, cool time for Lifetime. They’re really trying to go out there and grab great talent, great creators and they’ve put together an amazing cast. So I think this is such an exciting time to be a part of this network. So I’m very excited.