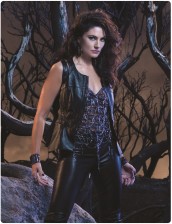 The actress talks playing a shapeshifter and spell-caster 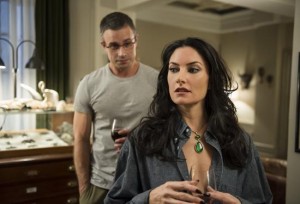 In Lifetime’s new series WITCHES OF EAST END, Sundays at 10 PM, Madchen Amick plays Wendy Beauchamp, one of the title characters. The playful Wendy, who has nine lives and can shapeshift into a black cat, senses danger for her more straitlaced sister Joanna (Julia Ormond). This prompts Wendy’s first visit to Joanna in a hundred years. Wendy’s arrival coincides with Joanna’s daughters Freya (Jenna Dewan-Tatum) and Ingrid (Rachel Boston) learning of their magical legacy.

Amick, who originally hails from Sparks, Nevada, got her first screen role on a 1989 episode of STAR TREK: THE NEXT GENERATION. Since then, she’s been a regular on TWIN PEAKS, C.P.W., the reboot of FANTASY ISLAND, FREDDIE and MY OWN WORST ENEMY, as well as having arcs on E.R. and DAMAGES; her feature credits include STEPHEN KING’S SLEEPWALKERS and starring opposite James Spader in DREAM LOVER.

At a session for WITCHES OF EAST END held by Lifetime for the Television Critics Association, Amick says that she sees Wendy’s role within the family as being the truth-teller of the group, as Joanna has deliberately tried to steer her daughters away from witchcraft.

ASSIGNMENT X: Were you looking to do television at this time in your life, or is this just what came up?

MADCHEN AMICK: Just open to it. I love film and television, it just depends on what comes my way. They asked me to come on and do a guest role for the pilot, and I was happy to do it, I had a good relationship with Lifetime, and then when they came and said, “We really would like to add you to the cast, we really like the dynamic,” I was just very excited that they appreciated it. [Originally, Wendy was] not a series regular.

AX: Have you played a witch before?

AMICK: I haven’t been a witch before. It’s really fun.

AX: Have you been in projects where other characters were witches, but you were not one of them?

AMICK: SLEEPWALKERS was kind of a vampire story. The movie PRIEST, that was about vampires.

AX: You’ve been in a lot of genre projects. Is the supernatural something you enjoy as a viewer?

AMICK: I do – I love this supernatural kind of stuff. I love really good vampire stories. Do you remember MERLIN, the miniseries – the old one with Sam Neill? That was so great. When it’s done well and you really care about the characters is when I really enjoy it.

AX: Do you feel more powerful when you’re playing a witch?

AMICK: What I love about the story of WITCHES is that it was designed to keep feminism down, it was back when women were fighting for their rights, and they designed this idea of witchcraft to suppress the women’s movement. So to me, it’s sort of ironic that this idea was formed to kill women, to burn them at the stake, to keep them down, and now we’re using it and sort of turning it around to be actually female empowerment. I just think it’s a beautiful thing.

AX: Do you know what the back story is for your character, when she was originally born and how it turned out that she has her specific powers?

AMICK: We’ve been told very minimal things, but I know that both Joanna and Wendy have been alive a very long time. They’re actually from another realm, and they’ve been banished and they’ve been sent to this world, and so now we’ve had to survive in this world.

AX: Is there any longing for home in Wendy? Will she try to get back to the realm she came from?

AMICK: I don’t think she’s trying to get back home, but there probably is a lot of history that she’s holding onto and wanting to remind – Joanna seems to always be very fixated on raising her girls the right way, and Wendy has to constantly bring up, “You remember where we come from, you remember what we fought against. We need to keep that in mind as we move forward.” You know the imminent danger that’s out there.

AX: Is that one of the things that’s appealing about Wendy for you?

I’m sure people say, “Well, how does the cast get along? How do the women get along? Are there any divas? Is there any cattiness?” Literally, no. We really do get along, and I feel like there’s probably a lot of other female casts that might say that and really not mean it – we really do and it’s been great so far.

AX: No cattiness, just a cat.

AX: Do you have any kind of relationship with the cat who plays Wendy in feline form?

AMICK: [laughs] Ironically, I am very allergic to cats. We had a cat inNorth Carolina that was just this adorable little thing. We now have another cat that’s very similar. But it’s funny – I was just joking that the cat really is the biggest diva on set.

AX: Do you try to be at all feline in your performance?

AX: Is there a lot of CGI in WITCHES or is what you’re reacting to mostly practical effects?

AMICK: They are doing both – they’re doing visual effects and practical effects, and I think they’re going to just see what works best and maybe do a combination. We did the promo shoot and they had a lot of pyrotechnics while we were doing it, so it’s kind of cool that they were wanting to use real fire instead of CGI fire. I always go to the old-fashioned practical [way of doing effects].

AX: In real life, you’re involved in organizations that promote healthcare in general, and specifically mental health and help for the mentally ill. Does the subject matter of WITCHES OF EAST END in any way overlap with your interest in real-world mental illness, that sometimes people who just have different beliefs are considered to be mentally ill when they’re not

AMICK: Yeah. I mean, just in learning about mental illness, the difference in mood disorders, there are new disorders that I feel people probably in old times attributed to, “you’re possessed” or “you’re demonic” or “you’re a witch,” and it’s interesting to see that correlation.

AX: Is there anything that playing Wendy lets you do that you haven’t gotten to do before?

AMICK: You know, I played a character in a remake of FANTASY ISLAND that Barry Sonnenfeld did, with Malcolm McDowell playing Mr. Roarke, and I was this supernatural character. I was a nymph, and I had all these powers, so I got to explore that really cool morphing and control of the wind and earth, but this to me – just being a witch, your powers are [potentially] endless. I know they’re assigning a certain rule to each person, we’re all ruled by something else, but it’s fun to have that opportunity.