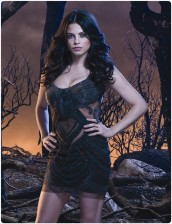 The actress talks about onscreen witchcraft and real-life motherhood

In Lifetime’s new Sunday 10 PM series WITCHES OF EAST END, adapted by Maggie Friedman from the novels by Melissa de la Cruz, virtually immortal witch Joanna Beauchamp (Julia Ormond) has been trying to keep the family’s magical heritage a secret from her two daughters. However, the two young women, Freya, played by Jenna Dewan-Tatum, and Ingrid, played by Rachel Boston, learn they are both witches who have been reincarnated as siblings born to Joanna many times before. The trick this time will be staying alive.

Dewan-Tatum, who originally studied to be a dancer in her native Connecticut, has some experience with the supernatural on television, having costarred in AMERICAN HORROR STORY: ASYLUM last year. Other credits include THE PLAYBOY CLUB and the feature films THE GRUDGE 2 and 10 YEARS.

Dewan-Tatum went to work on WITCHES just six weeks after giving birth to her daughter with husband Channing Tatum, but she looks refreshed and energized at a Q&A session sponsored by Lifetime for the Television Critics Association. The interview below is a combination of what Dewan-Tatum had to say at the panel and a one-on-one conversation shortly afterwards.

ASSIGNMENT X: Were you interested at all in the supernatural before you got this job?

JENNA DEWAN-TATUM: Very much so. I’ve always been a very spiritual person who’s always been intrigued by the mystical side of life, if you will, so when I read this, I was immediately intrigued and thought, how much more fun could it be to play a witch with magic powers every day? [laughs] It’s just something I’ve always really been interested in, for sure.

AX: The book and movie PRACTICAL MAGIC also deal with siblings who are witches. Do you think there’s any comparison between that and WITCHES OF EAST END?

DEWAN-TATUM: It’s like my favorite movie ever. When I read the [WITCHES] script, that’s exactly what the script reminded me of – PRACTICAL MAGIC as a TV show, especially with the sisters and the mom and the family dynamic. I think there are a lot of similarities. I think especially there’s a tonal similarity to PRACTICAL MAGIC. And yeah, that was one of the things that really excited me about the project, because I think that’s a really great movie, and it’s a really great tone [for a series] as far as witches and family and that dynamic goes. That was the thing, in my very first meeting, I was like, “Is the magic going to be grounded [as it was in PRACTICAL MAGIC]?”

AX: Do you have siblings in real life?

DEWAN-TATUM: I have three half-brothers, but they were born when I was eighteen, so I grew up an only child.

AX: So is playing the sister relationship between Freya and Ingrind something that you’re also excited about?

DEWAN-TATUM: Yes, yes. Growing and learning about what it’s like to have siblings is always interesting to me. I love watching shows about siblings, and learning about that is really fun. [They] love each other so deeply; they’re so different.

AX: In real life, you’ve just become a mom. Does that affect how you play a family relationship at all, or how you approach work overall?

DEWAN-TATUM: Yes. It was one of those things that happened without me even realizing it, kind of organically. [When] we started filming, doing a couple of the scenes, realizing that I’m saying these certain lines and it added so much more depth to what I was saying, given that now I have this little soul, this life that I’m taking care of and we’re dealing with so many family issues and we’re dealing with loss and finding out truths and just all this stuff that, having done that before having my daughter, it probably would have come out a little bit differently. Seeing it now, having had this transformation of my own life, without even thinking about it, transformed the way I said it, the way I delivered it. So I’m excited about that, and I think that’s something that I was really looking forward to about becoming a mom. I think it kind of depends everything a little bit, especially on this show, because this show is all about the family dynamics between a mother and her daughters, and here I am with a daughter. You know, it’s “Art is life, art imitates life.”

AX: How is being a working mom?

DEWAN-TATUM: It definitely is a challenge. [Motherhood] is a whole other job on its own. I’m finding I’m getting more in the flow of things now, but it’s about switching the brain from, “Okay, now I’m Mom. Now I’ve got to go to set and be an actress and jump into Freya,” and then coming back and breastfeeding. It’s a juggle, but I sort of feel like every new mom who goes back to work feels, and I feel really grateful that I have these amazing women and an incredible network and studio behind us that’s so supportive. They’re really working the schedule around with me and I’m getting just tons of help. So I’m managing, and actually it’s been quite nice to go and be creative  and ignite that part of myself, and I believe it’s going to make me a better mom at the end of the day. And Channing has been amazing. He comes and visits me. He’s working at the same time, but we prepared for that. It’s a little crazy in my house, but it’s good.

AX: Because Freya and Ingrid are reborn in a lot of different time periods, how does that affect what you’re doing in the show?

DEWAN-TATUM: It gives us a lot of places to go with the story and with the layers of our characters, because it can play on past lives. We can play on what’s happening now and just a lot of fun themes and stories.

AX: Does Freya go through a big personality change between how she is before she knows she has powers and after she is aware of them?

DEWAN-TATUM: No, actually, because it all actually happens in the first episode, learning that we have the powers that we have. I would say I stay the same character for most of what I know, but I do hear rumors that I have a pretty big arc at the end of the series.

AX: Is there a particular witchcraft power you’d like Freya to have?

DEWAN-TATUM: In real life, I can tell you what I want my power to be right now. I’d like to be able to snap my fingers and be asleep, because I’m a little sleep-deprived at the moment. But I guss on the show, I would say Freya is very ruled by her emotions, and so my power sort of comes from my emotions and how I’m feeling and ho the situation is making me feel, which therefore transforms the energy of a room. I think that’s a little bit I can tease.