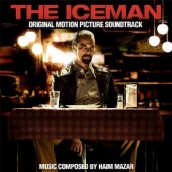 Being married to the mob is anything but romantic, especially when you’re a hitman in Ariel Vroman’s chillingly effective crime drama THE ICEMAN, made all the more disturbing by the fact that it’s based on the exploits of prolific contract killer Richard Kuklinski. Vroman’s kept it in the creative family by hiring fellow Israeli composer, and true murder follower Haim Mazar, who skillfully evades the jazzily orchestral Cosa Nostra clichés that would have made this period-spanning film nostalgically hollow.

Dealing with a Polish outsider to the organization, not to mention a guy who has a hard time holding onto his soul, Mazar goes for the dramatic jugular with this subtly suspenseful, and achingly sad soundtrack that compares well to such pulsating crime scores as THE TOWN. Creating a feeling of timelessness through his skilled combination of strings and piercing, grinding, metallic samples, Mazar captures the pained, conflicted soul of an antihero beyond measure, ratcheting up a feeling of musical discomfort that must be akin to some unlucky guy being taken for his last ride, cold, ghostly electronics becoming the chill of the hairs rising on the victim’s neck before the garrote wraps around it.

Yet there’s real emotional humanity to Mazar’s wet work in THE ICEMAN, an often-poetic sense of tragedy that might not ask you to sympathize with Kosinski, but at the least to try and hear him as a truly screwed up human being beyond his horrific actions. It’s one of the many levels that this darkly mesmerizing score hits, more than proving that newcomer Mazar deserves to be a Hollywood made man.