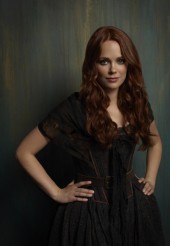 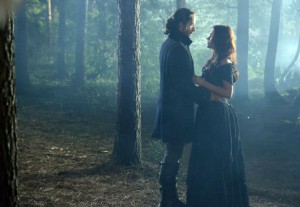 Most of the characters in Fox’s SLEEPY HOLLOW, Mondays at 9 PM, are dealing with some pretty strange situations. Ichabod Crane (Tom Mison), a soldier in the American Revolutionary War, has just awakened in 2013 and must stop the impending Apocalypse. His one ally, police lieutenant Abbie Mills (Nicole Beharie), must aid Ichabod while dealing with strange visions of her own. Meanwhile, Ichabod’s wife Katrina, played by Katia Winter, is trapped in a netherworld. Her witchcraft preserved Ichabod over the centuries and allows Katrina to give her spouse some cryptic warnings, but her current circumstances look pretty dire.

Actress Winter, on the other hand, seems perfectly happy with her real-life existence. The actress originally hails from Stockholm, Sweden, but she studied in London, where she worked in TV and film before coming to Los Angeles. Winter guested in an episode of NCIS and had an arc on DEXTER last season as Quinn’s tragic love interest Nadia.

At a party thrown by Fox for the Television Critics Association, Winter is hanging out with Zachary Quinto. It turns out the two have just worked together on a feature film; Winter stars in it and Quinto’s company Before the Door produced. Winter is happy to talk about that project and, of course, SLEEPY HOLLOW.

ASSIGNMENT X: How do you feel about playing a witch trapped in a mirror?

KATIA WINTER: Not very good. I mean, I feel good about playing the part, but the character is supposed to be a little difficult, and she’s in two worlds, and in the present day and in the past day, but I’m reaching out [to Ichabod].

AX: Do you get flashback scenes as Katrina before she’s stuck in the mirror?

WINTER: Well, there are flashbacks showing Katrina alive, but she’s very much part of the present-day story.

AX: Did you do any research into the late 1700s period?

AX: What did you learn that was most interesting or helpful?

WINTER: I don’t know, actually. A sense of the period. I mean, I grew up watching [documentaries about] that, I grew up studying history.

AX: Is it difficult working in the period costumes?

WINTER: Yes [laughs], it is actually quite difficult. You look great, your waist is tiny and you have a great shape, but it is hard. I have no idea how women did it back in the day.

AX: And do you have any feelings about playing a witch? Does it make you feel powerful?

WINTER: Completely. I love the idea of playing a witch.

AX: How do you feel your chemistry is with Tom Mison?

WINTER: Very good. The chemistry between all of us is actually quite fantastic. I mean, with Orlando [Jones, who plays police captain Frank Irving] and Nicole and Tom, it’s really good.

AX: What did you work on with Zachary Quinto?

WINTER: He produced a film I was in that’s coming out in October. It’s called THE BANSHEE CHAPTER.

AX: Is that a horror movie?

WINTER: Yes. I play a journalist who investigates the disappearance of her missing high school friend.

AX: Does being interviewed like this help you with playing a journalist?

WINTER: [laughs] Yeah, but this is after I played that part.

AX: Is there anything else you’d like to say about SLEEPY HOLLOW?

WINTER: I think it’s going to be a quite unique show, actually. It’s mixing a lot of different things, and somehow they just make it work.