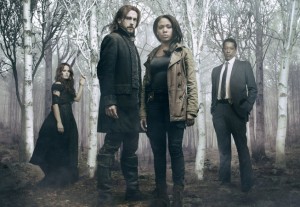 Pretty much everyone knows some version of the story of the Headless Horseman and the other story about Rip Van Winkle, even if fewer know that both were penned by the same writer, Washington Irving, in the early nineteenth century.

Contemporary screenwriter Phillip Iscove decided to combine elements of the two stories and took his pitch to writers/producers Roberto Orci and Alex Kurtzman at their K/O Paper Products production company. The result is Fox’s new series SLEEPY HOLLOW, Mondays at 9 PM. Tom Mison stars as Ichabod Crane, who in this version is responsible for the Horseman’s headlessness. A Revolutionary War soldier, Ichabod decapitates the fearsome Horseman in combat – and is shocked when the entity keeps on fighting. A hole in the earth swallows up both.

Ichabod awakens two hundred and fifty years later and emerges to the little town of Sleepy Hollow in the twenty-first century. Although she is understandably skeptical at first, local law officer Abbie Mills (Nicole Beharie) becomes Ichabod’s ally when the Horseman begins killing townsfolk. It turns out that this isn’t Abbie’s first brush with the supernatural. They uncover secrets suggesting that the Horseman may be one of the Biblical Four Horsemen of the Apocalypse. Orlando Jones costars as Sleepy Hollow’s police chief Frank Irving, who isn’t immune to signs and omens, either, and Katia Winter plays Ichabod’s magic-using wife, who is trapped in a frightening-looking netherworld. We get all this and more in the first hour.

Iscove, who also serves as a producer on SLEEPY HOLLOW, makes himself available to talk about his creation at a party thrown by Fox for the Television Critics Association

ASSIGNMENT X: How did you come up with the idea for SLEEPY HOLLOW?

PHILLIP ISCOVE: I want to say it was a confluence of a bunch of different things. I quite honestly was trying to come up with a time-travel show that wasn’t about time travel. And I love the Tim Burton [SLEEPY HOLLOW] movie from ’99, I love all that stuff, I love the short story. I looked up Washington Irving online, Rip Van Winkle, kind of folded [the “Sleepy Hollow” and “Rip Van Winkle” stories] into one another, and it was an opportunity to do both. It was that, and it was also a mixture, too. Alex [Kurtzman] and I both love TWIN PEAKS, and I was really looking for an opportunity to do a spooky small town show and trying to find that entry point, and this show just did all those things. I was able to have a spooky town with witches and I was able to have a man frozen in time and it kind of all came together.

AX: Are we to infer from the pilot episode that Ichabod essentially interrupted the Apocalypse by beheading the Horseman during the Revolutionary War?

ISCOVE: That is definitely a reasonable takeaway.

AX: Are we going to find out other signs of the Apocalypse that were happening during that period?

AX: Are there going to be a lot of flashbacks?

ISCOVE: Yes. Flashbacks are going to be very important to our television show. We want the past to inform the present in every episode. We want there to be mirrors and we want them to be playing off of each other in a lot of ways.

AX: How did you decide on what Ichabod’s personality needed to be like?

ISCOVE: I think that early on, we knew we wanted to deviate a little from the preconceived notion of Ichabod Crane. I think that the fastidious, professorial, odd lanky weird character wasn’t really what we wanted to do. We wanted to make him more in the Indiana Jones model of professor and badass and find a way to meld those two and not lose any of the nuance and things that people love about Ichabod Crane, which I do think that Tom does beautifully as well. So I do think we got to have our cake and eat it, too.

AX: How did you decide who the other regular characters were going to be?

AX: Was Abbie Mills always African-American in the script, or was that because of the casting of Nicole Beharie?

ISCOVE: You know, I think we went into this race-blind, I don’t think we went into this with the expectation of going one way or the other. I think that Nicole came in and she blew us away and we loved her and, as you can tell, she was supremely watchable and funny and grounded and intelligent. She brings everything to it. So we didn’t really go into it with any preconceived notions of race.

AX: But Ichabod’s surprise at finding a woman of color as an authority figure is addressed in the pilot …

ISCOVE: It was addressed in the pilot and I think that as we got further down the road with Nicole – she opened doors for us, is what it comes down to. It really added a whole new layer to the television show, if you ask me. And I think that that was exciting.

AX: It’s interesting that SLEEPY HOLLOW is one of the first, if not the first, network genre shows to have more African-American leads, with Orlando Jones, than Caucasian leads …

ISCOVE: Katia is white, so Katia and Tom balance the scales slightly. John Cho [is in the pilot] as well. think the network, honestly, like us, just wanted the best people for the show. I don’t think anybody was thinking about anything outside of that.

ISCOVE: I don’t want to say a hundred percent, but yes, I believe that he’s coming back.

AX: Did John Cho come in through the Robert Orci and Alex Gansa STAR TREK connection?

ISCOVE: And Len [Wiseman, SLEEPY HOLLOW’s pilot director/exec producer] as well. He was in TOTAL RECALL. They’d all worked together, so he was excited to jump back in with them.

ISCOVE: Honestly, the whole process was so involved, and in the best way possible. We were just dealing with that. We were dealing with making the best script we could, and these actors brought their own traits to it in the best way. As we move deeper into production, we’re going to learn things about our actors – what their strengths are and things we can lean into. So I think that as we move farther, we’ll know more and we’ll be able to play to that.

ISCOVE: A lot. We spent a long time breaking these thirteen episodes. It’s involved and it’s detailed and we are confident in where we’re headed.

AX: Do the thirteen episodes come to some kind of conclusion regardless of whether or not SLEEPY HOLLOW is picked up, or are viewers going to wind up grabbing their pitchforks and torches if the thirteen end with no resolution?

ISCOVE: I think there are contingency plans if necessary. We hope we don’t have to go down that road. As of right now, we’re planning towards a really, really exciting big finale.

ISCOVE: No. This is so time-consuming. I have a feature idea that I’m taking around and that I’m outlining a little bit that I’m hoping to eventually talk to some people about.

AX: Is there anything else you’d like to say about SLEEPY HOLLOW right now?

ISCOVE: I think that if people give it a shot, they’re in for a wild ride. It’s going to be a lot of fun.