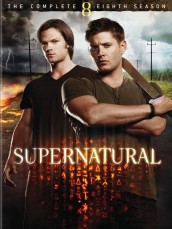 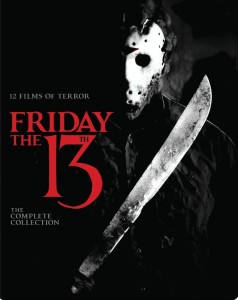 FRIDAY THE 13TH: THE COMPLETE COLLECTION – How epically cool is this? Finally fans of the FRIDAY THE 13TH get a chance to check out some of the classic films featuring one of the greatest horror icons of all time, Jason Voorhees, in all his incarnations and films. Now some people may complain that this is yet another compilation of these films but here’s what’s different – they are all in high definition. The original FRIDAY THE 13TH, PART 2, PART 3 and FREDDY VS. JASON have all been previously released on Blu-ray (and debatable about how well these have been transferred). However, THE FINAL CHAPTER, A NEW BEGINNING, JASON LIVES, THE NEW BLOOD, JASON TAKES MANHATTAN, THE FINAL FRIDAY and JASON X are all new to Blu-ray. They also have included the extended cut of the remake of FRIDAY THE 13TH from 2009, which isn’t half bad and has also previously been released on Blu-ray. Unfortunately, not a lot of extras here other than what has already been released on all of these films previously but if you don’t own this set and are a fan of the series, this is what you should get given all of these new to Blu-ray films as well as the high def versions of the others. Also nice to have them all in one complete set rather than multiple boxes everywhere. 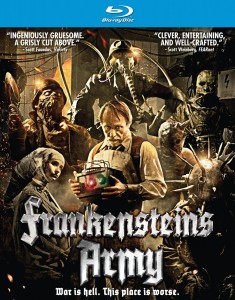 FRANKENSTEIN’S ARMY – I really loved FRANKENSTEIN’S ARMY for the very fact that it puts a new spin on the whole found footage horror genre that has become extremely popular of late. Instead of taking place in current times, this takes place toward the end of World War II as the Russian army is advancing on Berlin. They stumble across a small vacant town where they find some weird guy chained to a wall with large knives for arms. After arm-knife guy kills the Russian captain, they go venture deeper into the bowels of the town only to find more nightmarish creations from the mind of a madman. As one of the last projects from Hitler, he gave Dr. Frankenstein carte blanche to use both Russian and Nazi soldier alike to create a unique army made of undead, unstoppable man-machine monsters. Given we already had the subpar found footage horror film THE FRANKENSTEIN THEORY come out last, this really blows that film out of the water in terms of originality, scares and just pure batsh** craziness. Definitely fun and entertaining. 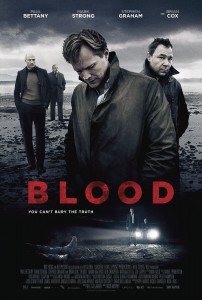 BLOOD – A pretty good British cop thriller about two detective brothers that have their old man hanging over their head as a model citizen of what a police officer should act like and be. Things go from bad to worse when the two detectives brutally murder a dude who they think committed a homicide of a young girl. But he didn’t do it and when the truth comes out about what they did, the family is plunged into chaos and tragedy. There are some real powerful moments here even if some of the drama is muddled in some subplots that don’t really further the plotline any. It also has a strong cast with Paul Battany, Brian Cox, Mark Strong (lead on COLD WINTER SUN) and Stephen Graham (who plays Al Capone on BOARDWALK EMPIRE). Good acting, good story and good drama, a nice change of pace from some of the stuff coming out of Hollywood. Maybe that’s because this wasn’t made there. 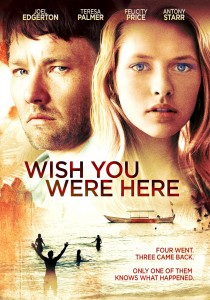 WISH YOU WERE HERE – A milquetoast Australian thriller about two couples that go off on an adventure in a foreign country but one doesn’t come back. Most think he left the reservation or got caught up on drugs. But one knows the horrible truth and isn’t saying anything about it. But this person also has other secrets that threaten to derail his marriage. He struggles to hold it together throughout the prodding of police and family members and finally cracks, revealing what he knows. Unfortunately, while tragic, isn’t something that any normal person would keep to themselves especially when so many family, friends and police people are wanting to know the truth. Probably worth watching if you have nothing else to watch but mostly it lacks any real punch. 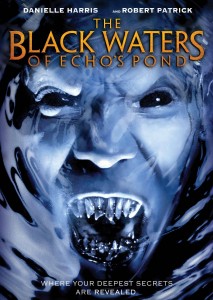 THE BLACK WATERS OF ECHO’S POND – Danielle Harris makes horror movies like they are going out of style. She was in HATCHET III just a few weeks ago, she directed the very good AMONG FRIENDS last week and now she stars in this flick as one of a number of friends that go to an island for fun, only to have a supernatural game turn friend against friend. The game starts off as a simple roll playing thing but soon goes into more than that as a dude suddenly becomes cursed and chops up a fellow chum. The story gets a bit shaky as you aren’t really clear what’s happening or why even some people are getting possessed and others are not. But the special effects are decent and the kills are pretty good which go a long way when the story of these B movie horror flicks falls flat. Netflix option at best. 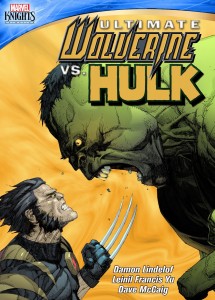 MARVEL KNIGHTS: ULTIMATE WOLVERINE VS. HULK – In the Ultimate universe, the Hulk has killed a slew of people in Manhattan and is being hunted by Nick Fury and S.H.I.E.L.D. for his crimes. But obviously, it’s the freaking Hulk. So who do you get to take down the biggest and most mean creature on the planet? The guy who can’t be killed or destroyed – Wolverine. That doesn’t mean it is easy and from the outset of this latest Marvel Knights digital motion comic Wolverine gets ripped in half by the Hulk leading to a confrontation that involves She-Hulk, Betty Banner and many more familiar faces. Add to this some really good art from Leinil Francis Yu and a story from LOST and STAR TREK scribe Damon Lindelof and you have a worthy next chapter in what has become a highly enjoyable digital motion comic series of short films. 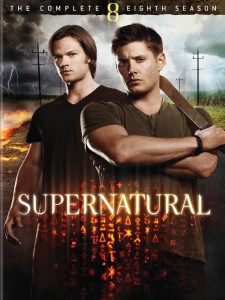 SUPERNATURAL: THE COMPLETE EIGHTH SEASON – There is a lot of worry from fans that the longer SUPERNATURAL stays on the air, the weaker the show will become given how good some of the other seasons have been. Luckily, Season 8 continues to show that there is definitely some teeth left to this show and there are still great stories to be told. At the end of Season 7, Castiel (Mischa Collins) and Dean (Jensen Ackles) were stuck in Purgatory. At the beginning of the season we see Dean escape from that hellish place accompanied by Benny, a vampire stuck there. We soon learn the two teamed up during Dean’s time in Purgatory and made a deal to come back to the land of the living together. This creates an interesting bond as well as future issues that must be addressed such as loyalty and the fact that Dean is a hunter helping and befriending a vampire. Meanwhile Sam (Jared Padalecki) had found a new love and moved along from his past life. But with Dean returning, everything he was is turned on its head and he is again compelled to become a hunter once more. Along with another episode with Felicia Day and some excellent one-shot episodes that usually are the most entertaining of the season, Season 8 was solid and fans are set for a good Season 9, coming this fall. 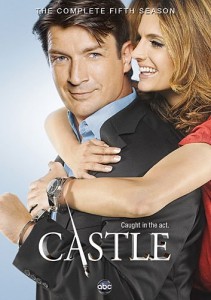 CASTLE: THE COMPLETE FIFTH SEASON – CASTLE is one of those shows that if you aren’t watching, you are really missing out. Not only does it have some great mysteries and adventures but it does so with some great humor and an impressive wit. Of course, with any odd couple pairing with a man and a woman you have the romantic angle and that’s OK too but really it is the storylines that make this show and the relationship (professional) between the two fictional characters of Castle (Nathan Fillion), a writer that is now helping police solve crime, and Beckett (Stana Katic), a homicide detective. Season 5 is more about balancing the romance of the two with the work, as well as Beckett’s continual search for her mother’s killer. There is a lot here in the fifth season and with 23 episodes also leads in nicely to the sixth season coming this fall. Here’s a great chance to catch up for the new season.