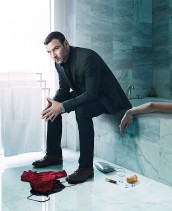 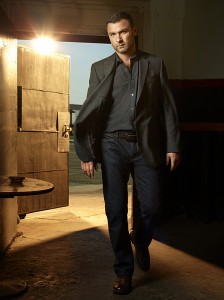 On Showtime’s RAY DONOVAN, Sundays at 10 PM, Liev Schreiber plays the title character, a Hollywood fixer who has brought his wife (Paula Malcomson) and kids (Kerris Dorsey as daughter Bridget, Devin Bagby as son Conor). Ray is good at his job, not so good with his often exasperated spouse and apoplectic that his father Mickey (Jon Voight) has been released from prison and is here to check in with the family. Ray’s brother Terry (Eddie Marsan) is a boxing trainer coping with Parkinson’s, while Bunchy (Dash Mihok) has a drug problem, stemming from the fact that, as a child, he was abused by a priest. Ray also learns from his siblings that they have a half-brother, Daryll (Pooch Hall), whose mother is still friendly with Mickey. It turns out that Ray isn’t the only one furious with the senior Donovan – some criminals have a beef with Mickey, too. What’s a private eye to do?

ASSIGNMENT X: How did RAY DONOVAN form in your mind? Did you first have the idea of, “I want to do a story about a fixer,” or …?

ANN BIDERMAN: I don’t know. I’ve asked myself that many times. You know, I think I just went and conflated these two preoccupations. I was interested in Irish crime and the kind of dynastic approach to crime and Boston. Other girls fantasized about their weddings and I would fantasize about capturing Whitey Bulger. The Catholic Church [child sex abuse] scandal was another preoccupation and I just suddenly realized I could do both, that I could marry this idea in Hollywood with this Boston family with this underlying theme of abuse, and it all kind of came together.

AX: Is that the point at which you thought, “You know, this should really be a series, because there’s no way of cramming this into two hours” or did you already think, “I want to do a series,” and then, “What should it be?”

BIDERMAN: I think it became obvious fairly quickly that it was a [television] show. It’s hard to describe how you know that one is one and not the other, but it became clear to me that it was a series. Yes, it is dense. There’s a lot of back story, and I want to stay with these characters. I fell in love with them – I like them so much that I didn’t want to wrap it up that quickly, I wanted to stay with them for awhile.

AX: Have you ever personally needed the services of someone like Ray Donovan? If not, how did you research his line of work?

BIDERMAN: Not personally, no. I’m just trying to think if I know anyone who has. But I did know a number of private investigators and did a tremendous amount of research and did extensive interviews with people. I’ve gone on stakeouts, I’ve done all kinds of crazy stuff. I followed people. I’m a great believer in research, so I spent quite a bit of time trying to understand the world [of the story].

AX: How does Ray feel about his brothers, especially Bunchy?

BIDERMAN: Obviously, [Ray has] guilt over Bunchy being abused. I mean, he’s older than Bunchy and it’s something he couldn’t stop, so there’s tremendous guilt.

AX: And Ray’s dad Mickey seems to have a sort of varied personality …

BIDERMAN: He blew away the priest that’s been abusing his son, but Mickey’s very charismatic and charming and truly loves his family and has done some awful things. [At the start of the series], he’s just gotten out of prison and he’s not socialized and doesn’t know how to behave and he’s appalling, you’ll come to see. He’s not particularly political correct – there’s an episode where [Mickey] gives Conor a talk about the facts of life that is probably [laughs] – let me put it this way, I shocked myself writing that one, but he’s extremely aberrant. 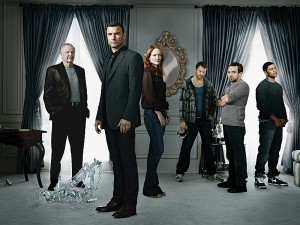 BIDERMAN: I’m the writing producer, and Bryan [Zuriff] and Mark [Gordon] are executive producers, and very hands-on, and helpful and great, but we don’t really divide it up. Everyone has an opportunity to look at cuts.

AX: Did you wind up with your dream cast for RAY DONOVAN?

BIDERMAN: Yes, absolutely this was my dream cast, without question. You know, there was a moment I just thought, “Unless we have someone like Liev, I don’t want to do the show.” I didn’t want to do it just to do it. It really took a special actor with great authority, sex appeal, a great voice. Liev, when I first met him, said, “What qualities did you see in me? How am I like the character?” We were sitting somewhere and I said, “I need a man. You’re a man.” People were waving at the next table – I was shouting, “I need a man!” [laughs] But it was true. Liev is a man. That’s a man.

AX: Is there anything else you’d like to say about RAY DONOVAN right now?

BIDERMAN: You know, it’s hard for me to explain my work. It’s like explaining a dream. I don’t know where it comes from. I can chart some of it back, but I feel, let the show speak for itself. It’s what I want to put out and say, and I’m very lucky and happy and thrilled, and Showtime has been amazing, and that’s about it.