The actor also talks his old 24 gig and his work with the U.N. 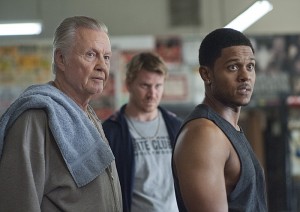 On Showtime’s RAY DONOVAN, now in its first season Sundays at 10 PM and already renewed for Season 2, Liev Schreiber’s title character is a professional fixer. If you can pay his fee, he can take care of that cocaine bust or the dead prostitute in the bed. However, even Ray can’t find a fix for his father Mickey, played by Jon Voight. Mickey has just gotten out of prison after serving time for murder and he insists on getting back into the lives of his sons, much to the fury of distrustful Ray.

Voight, a New York native and veteran actor who earned a Best Actor Oscar for his performance in COMING HOME, has primarily worked in feature films, but he’s done some work as a TV series regular in the past few years, starring as the antagonistic Jonas Hodges in 24’s seventh season and as patriarch Clint Thatcher in the admired if short-lived LONE STAR.

At a party thrown by CBS for the Television Critics Association, Voight takes some time to talk about RAY DONOVAN, as well as some past roles and his real-life work with victims of nuclear radiation.

AX: You’ve played a lot of powerful, intimidating people. Mickey Donovan is powerful in some respects, but he’s not economically powerful. Is that different from playing, say, the wealthy gentlemen you’ve played in 24 or LONE STAR?

JON VOIGHT: Yeah. This guy, he’s an interesting fellow. I’ve never come across this character on screen before – very unique fellow, very surprising, very dangerous, and he’s a survivor, so he’s very cunning, but he’s also a libertine and a mess. He’s all over the place. He’s a very, very interesting, complex character and I am very fortunate being the one who got to play him.

AX: Do you have any recollections of your time on 24?

VOIGHT: The 24 group [were] a really well-oiled team, a real professional crew. And it’s fun to be on the set with these people. They all like each other, they’ve worked very hard with each other, they know how to work – you’re going into this kind of dance, and I just said, ‘Well, here’s what I’ve got to bring to it,’ and I was looking for them to show me how they do it. And when you watch the show, you see a certain style – as an actor, I’m a little bit aware after all these years about cameras and stuff like that and just how they shoot this show, to keep it so alive, and they have long sequences on this show, sometimes with a hand-held camera, and this [was] fun for me. In some ways, it’s like doing the kind of work that you do on stage or in class. You’re playing around and you’re in a dangerous circumstance. You’re not caressing it, just up to here and then to there and then cutting the scene up in little pieces, you’re having a shot at going and doing it. So anyway, it was fun for me to see how they did it and participate. This guy [Voight’s character didn’t] deserve to live [laughs], he’s as bad as it gets. He’s an evil force, this guy. Evil people really don’t know they’re evil. They have a rationalization for what they do. Protecting the country – I think he thinks he’s doing that, but he’s very far gone, this guy. But you know, it’s fun, too, because I know being on the other side, the leading man, you want to have something to go up against, you want to have a formidable force against you. If somebody comes on and doesn’t give you anything, you’re in trouble, things disappear and you have to do it on your own. But I think I provided a lot of energy for the show. I think it [24] had a wonderful run and left a tremendous impression.

AX: You’ve primarily been a film actor for many years. 24 was your first season-long series gig in decades. Was that bracing or difficult for you?

VOIGHT: First of all, it was a challenge. The idea of doing episodic was an interesting idea. I adapt very easily to formats. I like different formats. I really like those long television films, maybe six-hour miniseries – I like that form, it takes a certain kind of writing and a certain kind of work – and of course I like film. Sometimes I think we get a little spoiled with film, because we become so careful and stuff like that. It’s more difficult. You wait a long time, you don’t get a chance to do wonderful scenes, you’re doing pieces and you’re waiting for lighting. I love the beautiful films that they make. But [episodic television], it was coming to act in a certain way. You had to be very prepared and then you go in and before you know it, the camera’s going and you’re doing it. ‘Let’s go, let’s give it a shot.’ Not a lot of rehearsal. Sometimes that’s good.

It’s all acting. You have to know what you’re doing. And I’m so experienced – I have done so many kinds of things, so although every scene is new, it’s not like I’m in totally new territory ever, and I know what’s required of me, and I know when I’m taking a shot and making an experiment, too, and that’s good, too – “Let’s try this” or “Let’s see how this works.”

AX: RAY DONOVAN shoots in Los Angeles and 24 shot in L.A. and Santa Clarita. LONE STAR was made in Texas. How was working there?

VOIGHT: We did shoot in Texas, and we enjoyed it. I must say the people in Texas [were] wonderful. They’re very positive people, very open, and theye embraced us. We’ve had a lot of fun inTexas. It was very hot there, obviously, in Dallas. Very hot. But we got a lot from the value of shooting there. So it makes a broader tapestry. For instance, we shot the first episode after the pilot on a big wind farm. You see this flat land, there’s miles of wind farm. You couldn’t get that anywhere else.

AX: For years how, you’ve been involved with the United Nations, trying to help the survivors of the Chernobyl nuclear disaster in Russia …

VOIGHT: Yes. Every year, we do a dinner and we get people rescued from that area. We get them out of Russia into hospitals in Israel.

AX: Do you like the novelistic sort of storytelling that RAY DONOVAN employs?

VOIGHT: Actually, each time I’ve done a different kind of genre, like a three-hour miniseries or this kind of thing, which is episodic, I’ve fallen in love with the form. It’s like poetry. I love poetry – if you can say it in eight lines or something like that, that excites me as well. If you have a short piece to do, you can compare it to doing that. In this long piece, I’m really enjoying it, because I don’t know where it’s going to come out exactly, but the writing is so wonderful. This kind of journey is very, very interesting, but you have to have great writers who do this properly, people who understand the arc of the piece going in and who can carve it out so these characters interact and develop and come out at the end some place where they couldn’t have anticipated when they started. And that’s what this is.

AX: How do you like working opposite Liev Schreiber, who plays your son Ray?

VOIGHT: I’m crazy about Liev Schreiber. I’m a big fan of his and I was always thinking that this guy, he’s wonderful in everything he ever did, but he never got a chance to play a leading man. And this is the kind of leading man that only could be played by an actor of great power and danger, and a guy with a sense of humor and great depth and a sensitive side as well. He’s sexy, he’s smart and all of those things. And he’s just knocking it out of the park for me. I love acting with him and I’m so proud of him.

AX: How is series creator Ann Biderman as a show runner?

Ann Biderman is a wonderful writer and a great show runner. She is not only a writer who created SOUTHLAND and did NYPD BLUE and won an Emmy for an episode of that and did several movies, worked with Michael Mann recently, but it’s also natural for her to take the whole thing under her aegis and umbrella and take care of every detail. That’s what she does. She’s not only writing it, she’s guiding the other writers, and then she’s kind of supervising when she can on the set, and encouraging the other writers to participate on the sets for their episodes. She’s doing many wonderful things just as a leader, just as an artistic mentor, in every aspect. And then she watches each episode through each editing stage, from the music to everything else. She we are being care-taken so perfectly in this piece. That’s why I know that people are going to be happy throughout the series and to the end. She’s done a wonderful job.