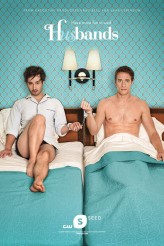 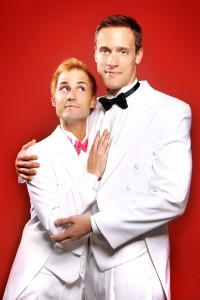 Cheeks and Sean Hemeon in HUSBANDS

HUSBANDS THE SERIES is the independent Web series that could – and did. The brainchild of creators Jane Espenson and Brad “Cheeks” Bell, HUSBANDS began life as a series of eleven two-minute segments, directed by fellow exec producer Jeff Greenstein, about two men, entertainer Cheeks (played by Bell) and baseball player Brady (Sean Hemeon), who are dating each other and then wake up from a drunk night married in Vegas once a Federal Marriage Equality law has passed.

Season 1 went up on HusbandstheSeries.com and promptly became both a Web and a civil rights entertainment phenomenon. It won awards, it got written up in the New Yorker, its makers and cast were invited to speaking engagements ranging from GLAAD to Comic-Con. When HUSBANDS reached out to its fans for $50,000 to make a second season, the goal was reached within days.

Season 2 consists of three eight-minute segments that deal with the difference between gender stereotypes and sexuality (acting in ways that are not traditionally associated with masculinity doesn’t mean a man is gay and acting in traditionally masculine ways doesn’t mean he’s not – the definition is simply attraction to other men) and with whether Brady and Cheeks are actually comfortable with one another and with who they are with one another. It packs a great deal of emotion, argument and comedy into the length of one standard network television half-hour.

The CW’s online branch, CWSeed.com, has picked up HUSBANDS THE SERIES for a third season (or possibly a third and fourth season, depending on whether one counts the current run as one season or two), with two stories broken into three parts each. Season 3 premiered on CWSeed.com on August 14; new episodes will appear each Wednesday.

The Paley Center for Media in Beverly Hills just held its second HUSBANDS THE SERIES premiere event.Bell took some time on the red carpet to talk about his show.

ASSIGNMENT X: With the third season of HUSBANDS being picked up by CW Seed, are you taking on more of the producer’s role than you had previously, because of Jane Espenson’s increased work load on ONCE UPON A TIME and ONCE UPON A TIME IN WONDERLAND?

BRAD “CHEEKS” BELL: Yeah, I have the same responsibilities as a producer, but there is less of a sounding board, I guess, because Jane is gone working on those other two shows, mostly. But it’s still very collaborative and very much the same.

AX: Do you feel like you’re relying on your instincts are a little more?

BELL: I’m trying not to question my instincts, but I also don’t question feedback that I get about choices that those instincts have led me to. So I’m very open, but I very much trust what my initial sense is about a creative choice.

AX: When in the process did CW Seed come into it? It’s been said that some of the current season had been shot before they picked it up.

BELL: Yeah. We shot one story [concerning the renewal of Cheeks and Brady’s vows] simultaneously with Season 2, and we used that essentially as a calling card, and CW loved it and wanted us to make one more, so that was the one that we made in May.

AX: The CW Seed has made some beautiful posters for HUSBANDS. Does the poster that shows you and Sean Hemeon handcuffed to one another have any reference to a scene that may be in this season?

BELL: It does. It has reference to the handcuffs that we use, also handcuffs as a sitcom trope, and the events that are pushed together.

AX: In Season 1, the central issue was, can two people make it work because they’ve determined to make it work. In Season 2, it was gender identity versus sexual identity. Can you say what the themes of Season 3 are?

BELL: I think [the theme is] how much do you let the outside world influence what is between you in your relationship, and I think also the gender and sexual themes recur throughout the entire series, so you’ll see more of that, too.