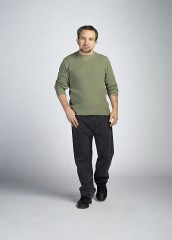 The actor talks Parkinson's and boxing in the new Showtime series 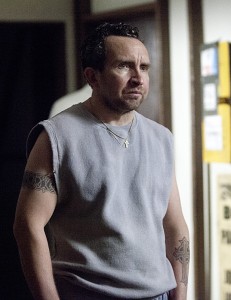 In Showtime’s new series RAY DONOVAN, premiering tonight, Sunday June 30 at 10 PM, Liev Schreiber plays the title character. In the series created by Ann Biderman, Ray is a Hollywood “fixer,” the kind of guy who, for a price, can straighten out situations like waking up to find a dead prostitute in the bed. What Ray can’t seem to fix is his own family – some of his problems include the fact that his homicidal father (Jon Voight) has just been released from prison and one of his brothers, boxing trainer Terry, played by Eddie Marsan, has Parkinson’s.

Marsan, a prolific actor originally from East London who plays Inspector Lestrade in the SHERLOCK HOLMES feature films (among many other credits), says he has been close to several people in his own life who had Parkinson’s. “My life was changed by a bookmaker [bookie] from the East End who suffered from Parkinson’s and died two years ago. I worked for him. I got a job with him when I was sixteen, and I served an apprenticeship as a printer, and when I finished my apprenticeship, I was still working for him on weekends, because I wasn’t earning much money. And he knew I wasn’t happy. He said, “What do you want to do?” I said, “I want to be an actor.” So he said, “I’ll pay for you to go to drama school.” And one day, he got robbed in his shop and somebody hit him over the head with a brick, and subsequently, sixteen years later, he developed Parkinson’s disease. We think it came from the hit on the head. He was eighty when he died, and it developed when he was about sixty-eight. He died two years ago, but he was my best friend and changed my life.”

Marsan notes that he’s studied a lot of different people who have Parkinson’s, including boxers who have developed the disease as a result of taking punches to the head.

“People have very stereotypical ideas about Parkinson’s sufferers, and it’s not all the same,” says Marsan. “There are different forms of it. There are different ways of [portraying] it. There are different ways people overcome it. And what for my friend was heartbreaking was the way it was debilitating his confidence. One of the things about Terry is, when he was younger, he was the oldest brother, the toughest, the one who was more competent and felt responsible for the others, but now Ray is looking after him to a certain extent, which was what happened to my friend. He was the guy who was at the bar who got the drinks and looked after everybody, and then people had to look after him, which was the hardest thing for him to do – the psychological damage rather than the physical damage.”

After a panel on RAY DONOVAN for the Television Critics Association, Marsan takes a few minutes for private discussion.

ASSIGNMENT X: At the time your friend became ill …

EDDIE MARSAN: We never knew what it was, because it wasn’t shaking or shuffling. He lost his coordination and then it was diagnosed as Parkinson’s. And in retrospect, I went back and I realized the robbery in the shop was the thing that caused the Parkinson’s.

AX: Does Terry’s Parkinson’s manifest itself in the same way that your friend’s did?

MARSAN: No, it’s slightly different. He manifests in a very, very subtle shake.

AX: Did you have to work at an American accent, or did that come easily to you?

AX: Terry seems relatively tamped down as a person. Is that difficult to play?

AX: Had you done boxing before this role?

MARSAN: Never in a ring. I’ve gone to gyms and worked out and stuff, but I’m quite coordinated, so me and Pooch [Hall, who plays Terry’s half-brother and boxing trainee Daryll – Hall has been a boxer in real life] worked on it very hard.

AX: So he was sort of your coach in reality?

MARSAN: Yeah. He coached me to coach him.

AX: So off-screen he told you how to do things, and onscreen, you just fed it back to him?

AX: Was that kind of switching back and forth enjoyable?

AX: How immersed is Terry’s side of the story in Los Angeles?

MARSAN: Well, there’s a similarity between Terry and me in that Terry is a bit of a fish out of water inL.A., and I feel exactly the same.

AX: Did RAY DONOVAN bring you to Los Angeles?

MARSAN: Yes. Well, I’ve worked here – about fifty percent of my work has been in theU.S., but I’ve never wanted to come here and wait by a swimming pool for work. I always go where the work is. I’ve been asked to do series here before and turned them down, because being a character actor, my job is to be different in everything I do. But the part of Terry was such a good part, and to work with Liev for such a long time is something I’ve wanted to do, so I decided to come over and do it.

AX: And is there anything else you’d like to say about RAY DONOVAN?

MARSAN: No, I’m just very excited to be here. It’s the first time I’ve ever done an American TV series and I’m looking forward to it.