An episode with good moments, but consisting largely of set-up 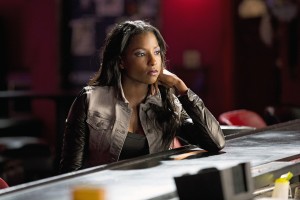 TRUE BLOOD has so much going on that sometimes it has to stop, take a breath and let the audience and characters get their bearings. “The Sun” feels like an episode primarily designed to do that. It’s pleasant, it has moments of humor, drama and suspense, but mainly it seems to exist to get everybody into place for bigger conflicts to come.

Turns out that Jason’s passenger (Rutger Hauer) isn’t really Warlow after all – that’s just what he implied and what we and Jason inferred when he said, “Who do you think I am?” Actually, he’s one of Jason and Sookie’s forebears, Niall, a fairy king who is very disappointed with Jason’s thick-headedness. (Who wouldn’t be?) Turns out the fairy gene has bypassed Jason. However, Niall is very interested in Sookie. He says that Warlow (who we apparently see coming through a dimensional portal, beard and fangs first) has been interested in their family for centuries.

On her own, Sookie meets a young man, Ben (Rob Kazinsky), who is lying injured in a ditch after surviving a vampire attack. Ben is part fairy. He and Sookie share an attraction, but Sookie thinks romance with anyone right now isn’t a good idea and directs Ben toward the invisible fairy nightclub.

With his quartet of growing half-fairy toddlers running around him, Andy (Chris Bauer) unsuccessfully tries to beg their fairy mother to take them back.

Bill (Stephen Moyer) has a vision of meeting Lilith (Jessica Clark) in a sunlit field, where she tells him he doesn’t get to be Bill Compton any more and he replies that he doesn’t know who he is. He also has visions of the deaths of many vampires, and feels despair that he can’t help them all. Jessica (Deborah Ann Woll) tries to get Bill a paid human blood donor, but Bill – without seeming connected to what he is doing – telekinetically snaps the woman’s bones, then causes all of her blood to fly out of her mouth into his. Lilith gives Bill some enigmatic prophecies. Jessica, feeling completely alone, prays to God and/or Bill, not sure if they’re now one and the same.

Eric (Alexander Skarsgard) digs what turns out to be a silver bullet with ultra-violet rays out of Tara (Rutina Wesley) at the bar, then leaves her with Pam (Kristin Bauer von Straten) and Nora (Lucy Griffiths). Nora assures Pam that Eric loves his progeny and is very proud of her.

Eric tries to glamour the Governor (Arliss Howard). Turns out that in-the-know humans now have vampire-proof contact lenses. However, the Governor’s attempt to capture Eric fails and Eric gets himself invited into the bedroom of the Governor’s teenaged daughter Willa (Amelia Rose Blaire).

At the bar, Arlene (Carrie Preston) and husband Terry (Todd Lowe) are visited by the pregnant widow of Patrick, Terry’s old Army buddy who he was forced to kill last season. Arlene tells the young widow her suspicions are right and that Patrick ran out of her.

Sam (Sam Trammell) is harangued by supernatural rights activist Nicole (Jurnee Smollett-Bell, who wants him to come out of the shifter closet. As if this isn’t enough, Alcide (Joe Manganiello) shows up with Emma’s (Chloe Noelle) grandmother Martha (Dale Dickey). Since Emma’s mother Luna is now dead and Emma is a werewolf, like her late father, Alcide and Martha believe Emma belongs with the pack rather than with Sam. Sam and Alcide square off, with Sam – and poor Lafayette (Nelsan Ellis) – getting the crap kicked out of them. Alcide, Martha and company leave with Emma, despite the child’s protests – and Nicole and her pals get the whole thing on video-cam.

There are some fun moments here, especially when Eric impersonates a dweeby whooping crane enthusiast so that he can get in to see the Governor, and Emma and Lafayette playing dress-up together. However, between Niall filling in Sookie and Jason, Lilith making cryptic revelations to Bill and the supernatural-rights folks, there is a lot of simply making sure we understand which A things are moving from to the requisite B. The actors are appealing as always – and Skarsgard is a hoot doing his folksy birder impression – but a sense of urgency hasn’t taken hold just yet. “The Sun” is fun, no more, no less.