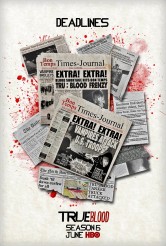 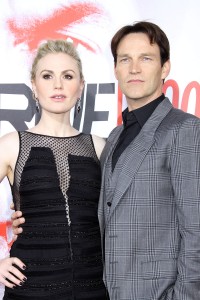 When last we saw our friends from Louisiana in the Season 5 finale of TRUE BLOOD, the Vampire Authority headquarters was on fire, Bill Compton (Stephen Moyer), once as true-blue and moral as a vampire could be, had died and resurrected as a blood-covered no-one-knows-what and was snarling at a thoroughly freaked-out Sookie (Anna Paquin) and less conscientious but also less susceptible to brainwashing vampire Eric (Alexander Skarsgard), who gave Sookie the sensible and loud advice, “Run!”

The Season 6 premiere, “Who Are You Really?” – a good question about Bill and some new characters as well – starts right where last year left off, with Sookie and Eric fleeing right before the building explodes and the naked, blood-covered Bill (or whatever he is) levitates right into the sky, Superman-style.

Jessica feels a summons from Bill that causes her to start hemorrhaging. When she is taken to Bill’s mansion, he is there – looking perfectly normal and calm. When Bill and Eric get into a fight, Sookie stakes Bill to save Eric – the stake has no effect, except to surprise Eric that Sookie would take such a step to save him.

The Governor of Louisiana (Arliss Howard) has declared that vampires must observe a dusk-until-dawn curfew and may no longer own businesses – bad news for Fangtasia. Secretly, he offers the company that makes Tru Blood use of a Louisiana-based bottling plant, saying that he actually looks forward to vampires having access to the drink and being productive members of society again. Uh-huh.

Bill acknowledges that he has new powers, but he’s essentially the same person. Nobody except Jessica trusts Bill; Jessica feels betrayed by Sookie and tells everyone else to stay away. She stays with him. Eric and Pam have a fight that leaves Pam teary and snappish. Back at the bar, Pam is so nasty to Tara that Tarais ready to leave – until the place is raided by human troops who are obeying the Governor’s mandate to shut down vampire-run businesses.Tarais shot with something potentially lethal.

Bill, not sure what he is now, snuggles with vampire offspring Jessica – but when he gets up alone, he has a vision (or visitation) of three Liliths zooming into his body.

Jason, still fired up with anti-vampirism, hitchhikes and accepts a ride – and the driver turns out to be Warlow (Rutger Hauer), the ancient vampire who killed Sookie and Jason’s parents. When Warlow says who he is, Jason shoots him, Warlow disappears and the driverless car heads for a ditch.

Andy Bellefleur (Chris Bauer) is having parenting problems, what with his four half-fairy babies in the house. No sooner does cousin-in-law Arlene (Carrie Preston) give him a pep talk about the joys of fatherhood than the babies are toddlers, scaring the crap out of the three human adults who had moments ago seen them as infants. Who knows – in days, they may have teenaged quadruplets. Good news is, if they survive that, likely neither Warlow nor anything else will Andy, Arlene and Andy’s cousin Terry (Todd Lowe).

So what do we think of the new plot? As usual, there are a whole mess of things happening, all of them pretty crazy. Humanity declares war on vampires right when Bill, normally an ace at smoothing things over, caused the whole crisis in the first place by bombing the Tru Blood factories (though the human authorities don’t know this), and we don’t know his mindset now. This is intriguing.

This leaves Eric as the standing moderate. Since Eric doesn’t really care who lives or dies apart from his immediate circle, this is also intriguing.

Making things even better is that the excellent actor Howard is in the mix. Moyer as director uses nice, subtle touches to influence how we see things – there’s a shot of the Governor where we see him at a slight angle where we get the edge of his glasses, a visual cue that he’s not being straightforward.

Sookie, for the kazillionth time, is trying to extricate herself from dealings with the supernatural. Woman, you are one-eighth fairy and practically everyone you know is a supernatural being. Get over it.

Pam is sulking. Pam, get over that.Tarahas a good grip on herself and is standing up for herself, her relationship with Pam and vampire rights. You go,Tara!

As for casting Hauer as an ancient vampire, between the weight of the actor’s screen history in general and specifically his iconic turns as Roy Batty in BLADE RUNNER and the Master in the feature film version of BUFFY THE VAMPIRE SLAYER, TRUE BLOOD could scarcely have chosen better.

The fast-growing fairy brood seems like a source of good humor. The werewolf sequence seems pretty much in this episode primarily there to deliver some nudity and sexuality, which the actors perform with their customary good grace.

Alan Ball, who created TRUE BLOOD based on Charlaine Harris’ vampire novels, stepped down as show runner at the end of Season 5. Brian Buckner has taken over and, if “Who Are You Really?” is evidence, there’s thankfully no discernible change in attitude. The show blasts forward with its typical blend of shocking, endearing and exasperating moments and it’s great to have it back.