Another okay episode where there’s a lot of energy expended, but not a lot of big moves 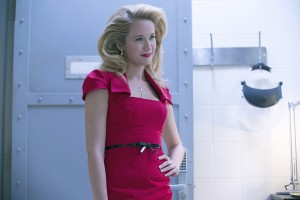 The previous episode of TRUE BLOOD felt like it was mostly set-up. Fair enough, but “You’re No Good” feels that way, too. There’s a lot of action and confrontation, but there’s also a sense that not a whole lot has changed from last week. Sookie (Anna Paquin) and Bill (Stephen Moyer) have a conversation and don’t reach détente, Sam (Sam Trammell) gets little Emma (Chloe Noelle) back from the werewolf pack and Eric (Alexander Skarsgard) is using Willa Burrell (Amelia Rose Blaire) to manipulate her father the Governor (Arliss Howard), but this all feels like incremental movement from last time.

The individual scenes are good. There’s a great tenderness between Bill and his progeny Jessica (Deborah Ann Woll) that plays out to touching effect. Since Bill has had a vision where he and vampire goddess Lilith converse in the sunlight, he thinks his new powers allow him to go out into the sun. He’s wrong about this; fortunately, Jess is able to beat the flames out when he makes his way back inside. Bill has also had a vision of many vampires he knows – including Jessica, Tara (Rutina Wesley), Eric and Pam (Kristin Bauer van Straten) – burning to the true death. He discusses this with Jessica, then with Sookie – Bill wants to use Sookie’s blood to create an antidote to the sun (fairy blood enables vampires to withstand the sun for a time). When Sookie refuses, Bill doesn’t force her, but says she’s dead to him. Then Bill remembers that Andy Bellefleur has a quartet of half-fairy daughters, who now seem to be preteens.

In other developments, Eric first says Willa must die, but reconsiders when she gives him information on the detention/experimentation/death camp for vampires her father has created. With Eric and Pam and Nora (Lucy Griffiths) continuing to threaten Willa,Taratakes matters – and Willa – into her own hands and absconds with the human.

Poor Steve Newlin (Michael McMillian) is a prisoner at the Governor’s camp, where he’s visited by his very unloving ex-wife Sarah (Anna Camp). He’s willing to tell anybody anything to get out of there.

When the werewolf pack realizes they’re being filmed by the vampire rights activists, Alcide can’t stop some of his wolves from killing people, but he does get Rikki (Kelly Overton) to shy off of Nicole (Jurnee Smollett-Bell).

Niall (Rutger Hauer) sees that the fairy nightclub has been decimated, presumably by Warlow. Poor Claude (Giles Matthey) is almost dead and begs Niall to put him out of his misery, which Niall does.

Bill feels that he needs to save the vampire population, just as he did in the previous episode.

Eric duels with the Governor, as he did in the previous episode.

Sam has custody of Emma, which he did at the beginning of the previous episode.

Niall warns Sookie and Jason (Ryan Kwanten) about Warlow for what feels like the five hundredth time.

Sookie doesn’t trust Bill and isn’t speaking to him, which … you get the picture.

There are some nice standalone scenes, like Sookie and Jason talking about their parents, with Sookie explaining that their mother was afraid of Sookie because of her telepathy and Jason for the first time realizing their folks weren’t perfect. There’s also a strong sequence, plainly spoken and beautifully played by Nelsan Ellis, with Lafayette explaining why he’s loyal to Sam.

We get plenty of fun, telling character moments here, but the plot seems to have slowed to a crawl, which is unusual for TRUE BLOOD. Granted, the season clearly has plenty to set up, but it would be good if one or two payoffs crossed the horizon soon.