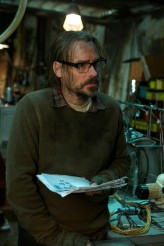 Tom Mason and his longtime adversary Pope survive a plane crash, but now must overcome their differences to survive the alien enemy that relentlessly hunts them down. 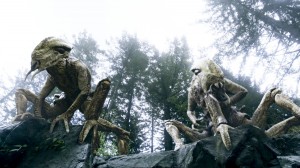 Without question, “Search and Recover” is the Season 3 episode of FALLING SKIES I’ve disliked the least, and since I haven’t been particularly pleased with the direction of this show since its premier, that’s something I’ve been hoping to say for a while now.  So what is it exactly that makes it better than all those that have preceded it this season?  Well, for starters, it opens with a bang.  Immediately we learn that General Bressler (Matt Frewer) is dead from injuries suffered in the plane crash at the end of the last episode.  In an apocalyptic show like this, giving the audience a sense that the odds against our heroes are so daunting that any character could die at any time is a good way to build excitement and tension, but unfortunately this is something that FALLING SKIES hasn’t exactly excelled at thus far, keeping most of the original cast intact for three seasons. Therefore I give them credit for jolting us a little by killing off a somewhat important character, played by a veteran actor with a pretty decent Sci-Fi pedigree (Max Headroom!), who looked like he was just about to become a bigger part of the show.

Also I like the fact that Tom Mason (Noah Wyle) and Pope (Colin Cunningham) are now each other’s only hope at surviving the wilderness after their plane has crashed in the middle of nowhere, and they have no defense against the elements and very little chance of getting away from the Skitters that are chasing them.  Unsurprisingly, Tom and Pope, who already hate each other, argue a lot during this sequence, but they do finally bond when Tom is able to light a fire using techniques they teach you in the boy scouts, and that leads to some ribbing from Pope and then a surprising revelation about Tom’s late father, (a mean drunk, apparently).  Both men then go on to share stories about their past.

This lost-in-the-woods sequence isn’t flawless, however, as Tom unexpectedly starts a brutal fistfight after Pope plays a practical joke on him, waking him up from a sound sleep with some nonsensical goofing around, and the transition from these guys being buddies to angrily beating the tar out of each other feels too abrupt and not particularly well motivated.  Also, when Tom injures his ankle and can’t walk, and the danger for each of them seems particularly acute, I found I was growing interested enough in this storyline where I would have loved to see it stretch out over a series of episodes, since it’s the most entertaining either of these characters have been in a while, and does give FALLING SKIES’ creators a unique set of circumstances to deepen these characters by showing them at their best and their worst.  However, my hopes were quickly dashed when a tense scene, which threatened the prospect of an awful, ignominious death for Tom as he lays helpless and immobile in the woods, is cut short by Pope conveniently finding a truck with the keys in it and enough gas to get them back to Charleston.  The whiplash from seeing Tom face his end to suddenly everything being okay again made for an almost comical transition, and a palpable sense of anti-climax.

When Tom and Pope return to Charleston they find out that Anne (Moon Bloodgood) and baby Alexis have likely been captured by the Espheni, and that his sons’ efforts to bring the two of them back home have failed.  Also, if Tom now pays attention just a little, he’ll probably realize that his son Hal (Drew Roy) is possessed by the aliens, because he’s acting conspicuously weird and it should be pretty obvious to everyone else at this point, too.

Also we learn that Marina Peralta (Gloria Reuben) would probably make a better President than Tom would, because in her role as Acting President while he was away she’s actually done her due diligence on their alien “allies” the Volm, and had Charleston’s only nuclear physicist, Dr. Kadar (Robert Sean Leonard) take a look at some top secret intelligence photos of the mysterious device they are building.  Apparently the device is “over-powered” and “overkill,” and not at all likely to be whatever it is the Volm are saying it is.  That’s presumably bad news.  But it could be good news for us, because keeping these characters in constant danger is the only way we’re going to care about them, and, for that reason, giving them benevolent alien friends with no hidden agenda wouldn’t be any fun at all.