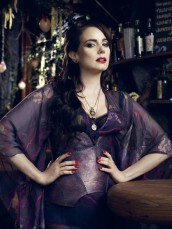 The actress talks playing the proprietor of an unconventional establishment 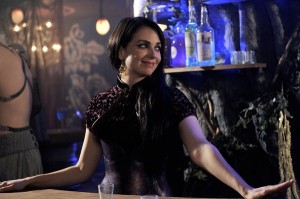 In Syfy’s DEFIANCE, which has its first-season finale Monday July 8 at 9 PM – it’s been renewed for a second season – Mia Kirshner plays Kenya Rosewater, the human proprietor of a bar/brothel that caters to humans and aliens of all genders.Kenya’s sister Amanda (Julie Benz) is the new mayor of the town of Defiance, formerly St. Louis,Missouri, and both women have an interest in the recently appointed town Lawkeeper, Jeb Nolan (Grant Bowler).

Kirshner, who hails from Toronto, is no stranger to the science-fiction and fantasy genres – her first on-camera work was in an episode of WAR OF THE WORLDS. Since then, she’s had roles in DRACULA: THE SERIES, THE CROW: CITY OF ANGELS, WOLF LAKE (playing a werewolf), 30 DAYS OF NIGHT: DARK DAYS and THE VAMPIRE DIARIES. Her non-genre work includes the acclaimed film EXOTICA, Brian De Palma’s THE BLACK DAHLIA, a stint on 24 and a series regular gig on THE L WORD. Additionally, Kirshner has written a nonfiction book, I LIVE HERE, about social crisis in various parts of the world, something she sees reflected in the fictional universe of DEFIANCE.

Talking about what attracted her to the series, Kirshner says, “It’s an immigrant tale and it really is a story, for me, about what happens when these culture, that have never intersected, come together on one play, and how they intersect and how they get along. I think you learn a lot about the mythology of those characters. I think what I like about the show is the element of realism and the culture clashes that happen, the sad violence that comes along with it, the stories and the beautiful reconciliation that comes along with it.”

Although in some ways the town of Defiance is an archetypal frontier outpost, Kirshner does not see her character Kenya’s domain, the NeedWant, as anything like a conventional frontier brothel, partly because the clientele and staffers are so varied, and partly because the workers are not there under duress. “It’s not that kind of place. It’s actually the opposite of that stereotype. And it was extremely important to me that it wasn’t a place where women were subservient to men. These are women who are empowered by their position. They love sex. They want to be there. It’s a place of exploration, and it’s a place of beauty. So that stereotype of a brothel being something where women are sort of these sexual slaves doesn’t exit there. And I wouldn’t be comfortable with doing something like that. So I’m proud that it turns the stereotype on its heels.”

At a party in a hotel ballroom decorated to look like the NeedWant, Kirshner takes some time to elaborate on her take on DEFIANCE.

ASSIGNMENT X: Did doing VAMPIRE DIARIES and your other genre projects give you any preparation for doing DEFIANCE?

MIA KIRSHNER: No. I mean, that’s a whole different show. It was very nice on the show, but every show is different, every role is different, like every person’s different.

AX: There’s a balance between Kenya being flirtatious, her genuine sexuality and her genuine toughness. Did you find that on your feet playing her, or did you think about it a lot before you did it?

KIRSHNER: I think it’s a combination. I think that you kind of find your character as you go. You have all these ideas about a character, but when you get onto set, once you’re in the room with the actors, everything changes.

AX: A lot of the characters are very kick-ass. Kenya does a bit of that, but not a lot …

KIRSHNER: Not at this point. It’s a very character – my stuff is very character-driven, not so action-driven, so not so much. But I like the drama stuff.

AX: How do you see DEFIANCE overall?

KIRSHNER: I think in a way it’s a cautionary tale. It asks the viewer to think carefully about what we want, because this is what we might get. Perhaps it’s a reflection of where we’re going and it’s about us.