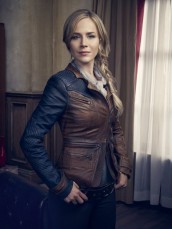 The actress talks playing the mayor of a multi-species town 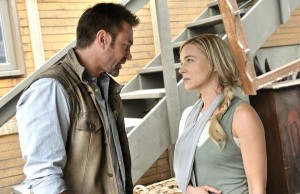 In Syfy’s new series DEFIANCE, in its first season Monday nights at 9 and already renewed for a second season, a spaceship carrying seven different alien races, collectively known as the Votan, crashed to Earth and caused massive changes in the landscape. This also caused war, though nine years ago, peace broke out, starting in Defiance (previously known as St. Louis, MO). DEFIANCE also is a multi-platform videogame, with some events in the series tied to those in the game and vice-versa.

In the series, the mayor of Defiance is Amanda Rosewater, played by Julie Benz. Amanda is new to her job, but determined to make it a safe place for humans and Votans alike. Amanda’s sister Kenya(Mia Kirshner) runs the town’s biggest brothel, the siblings are supportive of one another, although both are interested in Defiance’s new Lawkeeper, Jeb Nolan (Grant Bowler).

Pittsburgh native Benz is no stranger to genre television – among her many credits are her first feature role in “The Black Cat” segment of TWO EVIL EYES directed by Dario Argento, law officer Kathleen Topolsky on the alien drama ROSWELL, Angel’s vampire sire Darla on both BUFFY THE VAMPIRE SLAYER and ANGEL, the protagonist’s wife on four seasons of DEXTER and a series lead as a suburban mom suddenly gifted with super-swiftness on NO ORDINARY FAMILY. She’s also acted in some videogames, including the famed HALO 2.

At a party in a hotel ballroom decorated to look like a DEFIANCE tavern, thrown by Syfy for the Television Critics Association, Benz takes some time to talk about playing a politician in a new kind of frontier town.

ASSIGNMENT X: Does the fact that DEFIANCE the TV series is connected to DEFIANCE the videogame affect you as actors in any way?

JULIE BENZ: Not really, I mean, I’m not involved in the game yet, so I haven’t had any sense from it. I want to be in the game – I love doing videogames.

AX: We’ve been told that the original script for DEFIANCE changed completely during casting. Were you already cast?

BENZ: No, I was one of the last ones cast.

AX: So the rewrite didn’t affect you?

AX: Have you ever played a major politician before?

BENZ: Never. And that’s one of the things I really loved about it, was to be able to know what that war was like. And it’s hard. Amanda’s an idealist, and she really believes in the ideals of Defiance. She really believes that humans and aliens can exist in harmony, but she’s met with so much opposition and it’s hard. And because it’s a new world, because it’s post-apocalyptic Earth, and because the world has changed so much, the right choice isn’t always the legal choice. She’s not shady at all. At her core, Amanda always does what’s right. That doesn’t necessarily mean it’s legal.

AX: A lot of your costars are in heavy prosthetics playing aliens. Do you have any prosthetics/alien-acting envy?

BENZ: No, no. I’ve had my fair share of prosthetic work in my lifetime and, I mean, you reach an age where [other] guys can do that.

AX: Do you feel in some ways like you’re doing a Western with DEFIANCE?

BENZ: I do. I like that part of it, too. I’ve always wanted to be in a Western, and I kind of had an opportunity to do that – remember that show PEACEMAKERS? I did an episode of that. Getting to play a swindler in a Western was so much fun. So I enjoyed that.

AX: There’s a scene in the opening episode of DEFIANCE where you’re on a mountain ridge, shooting weapons down at these alien juggernauts. Were you actually up on a location mountain or were you working with a green screen?

BENZ: We were green screen on a platform. How cool is that?

AX: So you have to imagine, “The mountain is here and those things are down there”?

BENZ: You know what? I’m very good at putting my faith in the team [the producers] hire. We had an amazing special effects team, and it was very easy for me to be able to imagine the world that they were creating, and what was around me, and what I needed to do to make it alive. And they did a great job of showing me visual drawings and all of that. It was great. It was easy. It’s not always that easy, but when you work with a team like them, it was super-easy.

AX: What would you most like people to get out of DEFIANCE?

BENZ: Wow. At its core, this show is a character-driven drama. It happens to be set in the future with aliens. It’s not an alien show, it’s not a genre show. To me, it’s a real character-driven drama. I also think that DEFIANCE is the spirit of the people. So the name is not just tied up into the town itself – it’s the spirit of the people who live in the town as well.