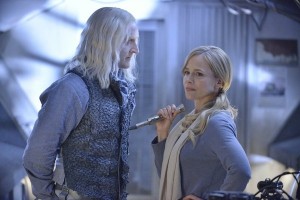 In Syfy’s DEFIANCE, Mondays at 9 PM, seven alien races, collectively known as the Votan, crash-landed on Earth. Accidental terra-forming and life-form creation occurred, as well as a lot of panic on all sides. It has been nine years since peace was declared between humans and Votans. The TV series, already renewed for a second season, takes place in the frontier town of Defiance,  formerly St. Louis, MO, while the Trion Massively Multiplayer Online Game DEFIANCE, designed to run parallel with the show, takes place in a reconfigured San Francisco.

Michael Taylor, one of DEFIANCE’s executive producers and writers, who also served in those capacities on BATTLESTAR GALACTICA, talks with us about how the TV series and the game synch up, as well as much more.

ASSIGNMENT X: You’ve been on DEFIANCE …

MICHAEL TAYLOR: From the very beginning to the very end.

AX: When things happen in the game that are supposed to have an effect on the story in the TV series, how much lead time do you need for those developments?

TAYLOR: There’s no lead time, because the game and the show are being developed at the same time. Everything is already shot. All those decisions have already been made.

These crossover elements are already built in. It’s almost hard to get your mind around.

AX: So the game players are not affecting the outcome on the series?

TAYLOR: The players are participating in a storyline – these are two things, two entertainments, that take place in two different locations in the same world. Between seasons, there could be stuff that happens that affects the second season that we as writers creatively can pick up on, if there are big developments, and use. But for a television series production, that kind of interactivity is almost impossible. There are tons of crossover elements built in. There is interactivity in the sense that stuff that happens in the show will then become an element in the game, and stuff that is seeded in the game a couple weeks before will then become a story element in our show. For example, a plague gets started in the game; it starts to happen in our show. The people in the game are looking for a cure and we get a cure and it comes from the game side of the show, but only because people in the game have already found it. But all that is planned. I mean, we’re not sure who’s going to find it in the game. These things – whoever the hero is – some guy or some woman player will find the thing that will save our town in the next episode of the show, but one way or another, they’re definitely going to find it.

AX: Assuming it is a player who finds it, do you have time to at least dub in, “And the cure was found by Dr. Player’s Name”?

TAYLOR: That’s possible. We do have the capability of overdubbing. We have radios that are constantly playing as one of the themes in the show that could report developments that are going on in the game. The game [launched] two weeks before the show. At that point, the show is done, so it all has to be planned. Between seasons, there’s an opportunity for real changes in the game to become fodder for the next season of the show.

AX: How much lead time do you have between seasons?

TAYLOR: We have a lot. Stuff [began] happening as soon as the game [began]. When I first joined the show, I thought, “Oh, there will be a lot of fun interactivity.” And then the reality hit of what production requirements allow. But at the same time, there is a ton of connection between these two worlds. And that’s really interesting. We have people who are dedicated to just dealing with that. A former staffer on the show went over to work on the game side to be a liaison. So there’s way more interactivity in that sense then there’s been in anything on television. It really is unique.

AX: At the beginning, Kevin Murphy and Rockne S. O’Bannon were both developing DEFIANCE, but then the CW picked up CULT, which O’Bannon had created, so he went to do that, which means Murphy is now the solo show runner. Can you talk about what kind of changes that created?

TAYLOR: Well, these guys are both wonderful writers. Rockne and Kevin are both brilliant writers, and Kevin was there from the beginning, too. So it’s a kind of continuity. I would say it’s more a matter of what changed in the show and in our conception of the show. Rockne had written a wonderful pilot, but I think they were struggling, kind of swimming upstream, trying to make it work. The stories weren’t quite happening the way the network wanted and I think we finally realized, this is a show about a town that was already established in the [original version of the] pilot. Character relationships were already established. It was such a new, strange environment, we had to experience it as if we were all new to it as well. So that necessitated a whole kind of rethinking, and that’s what happened with Kevin and me and the rest of the staff. We came up with heroes who were coming to the town for the first time. So in terms of the change of the show runners, it’s more in terms of the show. Rockne had another show, so it was a change dictated by necessity on one level, but on a creative level, it’s more about the changes that we understood that we needed to make in order to make the show more exciting and more fun and draw people into it.

AX: So that’s why Grant Bowler as Jeb and Stephanie Leonidas as Irisa come in from outside.

AX: Obviously, DEFIANCE is science-fiction – do you also feel it’s a bit of a Western?

TAYLOR: Oh, yes. Totally. I was really pushing for horses for a long time. Very disappointed – you can say that – there are no horses. But it’s very much a Western, meaning it’s a town on the boundaries, and if it’s the middle of the country, it doesn’t matter. The whole world is now a town on a borderline, a town on a frontier. So a lot of the same tropes still apply. Never mind that you’ve got your main street and your whorehouse and your brothel and bars and your lone gunslingers, but it’s a Western in that sense of people trying to make it, survive and prosper in a place without a ton of resources. And that I think is kind of the essence of the Western.

AX: Do you draw at all from FIREFLY, which is an earlier well-loved sci-fi Western?

TAYLOR: Not so much from FIREFLY – I never really saw that, though I did see SERENITY and liked it – but I draw from Westerns all the time. In fact, a little insider note, Episode Five is partly a play on a favorite Western, HOMBRE, with Paul Newman. We had a couple of writers on the show, David Wreddle and Bradley Thompson, who I had brought in from BATTLESTAR. David wrote a wonderful biography of Sam Peckinpah called IF THEY MOVE, KILL ‘EM, after a line in THE WILD BUNCH. A huge Western fan. So in the writers’ room, Western stuff is going back and forth a lot. Almost every script has some Western reference in it.

AX: DEFIANCE seems a little more gender-balanced than the Westerns of yore. It doesn’t seem like you have to be a specific gender to do any kind of a job, whether it’s gun-slinging or whoring or whatever.

TAYLOR: Absolutely. In that sense, it’s more of a contemporary show.

AX: In the DEFIANCE universe, has human racism – that is, human racism against other humans – gone because of the aliens?

TAYLOR: I think we haven’t seen any evidence of old racism. Often, in science-fiction shows, it doesn’t mean racism is gone, but it tracks along new lines. The theme of racism is still there, but yes – it almost seems drawing too fine a line to say – it’s like the old Tom Lehrer song, “The black folk hate the white folk …” National Brotherhood Week. The Castithans hate the Irathients, the Irathients hate [the Castithans], but not everyone is a racist. There are some human characters who are kind of anti-alien, but there’s that same sense that, in the trenches, all this stuff gets forgotten. I think that’s all part of the essence of the Western.

AX: Do you have a favorite alien race on your show?

TAYLOR: I guess I like the Irathients and the Castithans. More specifically, I like our characters – Stephanie Leonidas’ character [Irisa, who is Irathient] and Tony Curran’s character [Datak Tarr, who is Castithan], the way they embody them. Tony Curran’s Datak Tarr is our putative villain, but he’s just such a fascinating character, and same with Stephanie’s character. She’s a wild child, the girl with the dragon tattoo – the alien girl with the dragon tattoo.

AX: In terms of production, how do you determine what will be shot practically on the set and what will be done as CGI?

TAYLOR: That’s incredibly planned out. We built a huge set, we built a whole town on a back lot in Toronto. It’s amazing. But at the same time, we use a lot of green screen to augment stuff. So the production planning of the show was incredibly vigorous, to make it affordable, to make it dense, to make it cool.

AX: Julie Benz, who plays the mayor of Defiance, was saying that in the scene in the first episode on the ridge where her character and Grant Bowler’s Jeb are shooting down at the invaders, the actors were actually on a plank in front of a green screen.

AX: So is the philosophy essentially, if you have to leave the soundstage, you’re probably going to green-screen whatever the location is?

TAYLOR: Yes. We go to locations – woods, farms, all sorts of stuff – but some locations are not authentic. But where it adds to the show, where it adds visual quality, detail, fun, then we’ll try to make room for it.

AX: Apart from having to synch up with the game at certain points, is DEFIANCE pretty much like doing a normal TV show?

AX: And what would you most like people to know about DEFIANCE?

TAYLOR: Just that we pull out all the stops to give classic sci-fi fans some real science fiction, yet bring the same character elements, the same real-world perspective on people in a difficult situation, that we had in BATTLESTAR to a different environment. So we’re hoping we’re giving them the old sci-fi they loved and something new that no one has ever seen before.